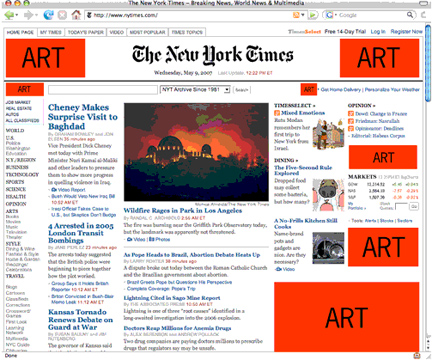 In addition to moderator Jamie Wilkinson, the panel will feature fellow F.A.T. Lab member Steve Lambert (who you may remember from the NYTimes Special Edition project a month back, among other projects), and Tobias Leingruber, creator of China Channel and the man behind Pirates of the Amazon. They’ll also be talking about ArtZilla, an awesome repository for Firefox add-on projects usually denied from listing on the addons.mozilla.org universe for being “useless art.”

In 2006 I started work on Add-Art the Firefox add-on which replaces ads on websites with rotating curated art shows. The add-on is in use →

From Appropriation to Infiltration: Accessing Public through Tactical Media You are cordially invited to attend the upcoming MFA Graduate Program Colloquium for spring 2011. WHEN: →

Performance/Lecture for “Free” at New Museum