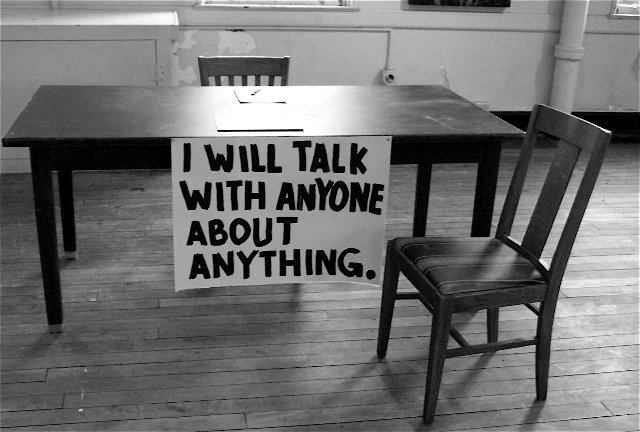 January 2007Exhibitions, NewsI will talk with anyone

I a have a participatory performance piece at the Headlands through February. It is a gallery version of my “I WILL TALK WITH ANYONE…” piece. It requires at least 2 people to work, preferably strangers. If you go, please snap some photos and send them my way.

Info from the Headlands:
Close Calls: 2007 is an exhibition showcasing 29 California visual art applicants for Headlands Center for the Artsï¿½ 2007 Artist in Residence Program, as well as three finalists for the Tournesol Award in Painting. The featured artists were all extremely close calls in the highly competitive application process.

Close Calls is another exciting venue for Headlands to recognize emerging California visual artists through a curated selection of their most recent work. Now in its fifth year, the show has become a highly anticipated and well-attended addition to Headlands programming. This exhibition will kick off programming for 2007, which is the 20th Anniversary celebration of Headlands Center for the Artsï¿½ Artist in Residence program.

Victor Manuel Cázares Vazquez will Talk with Anyone About Anything

Italian version of I Will Talk with Anyone

How to Talk With Anyone

I WILL TALK WITH ANYONE ABOUT ANYTHING