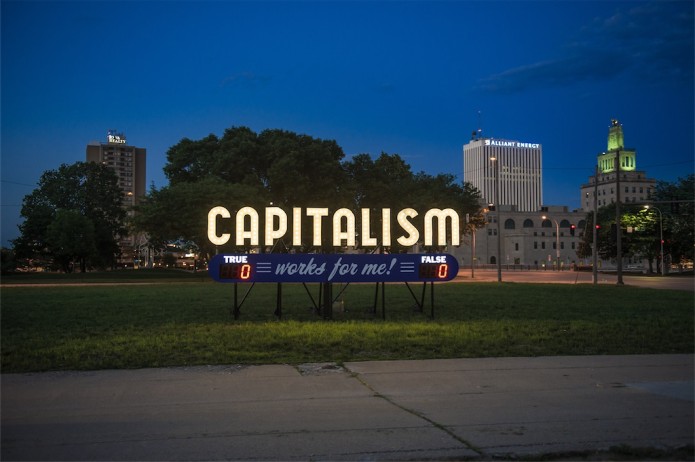 Bill Moyers had a show back in February called Taming Capitalism Run Wild with, my favorite economist, Richard Wolff.

I realize asking someone to watch a 45 minute video within a post online might be far-fetched, but if you have the time (now or later) I recommend it. We used it in the installation at Legion Arts because, as I am here in Iowa, this discussion is even more relevant. Here’s what Wolff has to say about the lack of criticism of Capitalism in the United States:

There has been that kind of thing in our history. I mean, we as Americans, after all, we take a certain pride, which I think is justified, we criticize our school system. We just spent two years criticizing our health delivery system in this country. We criticize our energy system, our transportation system.

And we want to believe, and I think it’s true, that to criticize this system, to have an honest debate, exposes flaws, makes it possible to repair or improve them, and then our society benefits. But then how do you explain, and that’s your question, that we don’t do that for our economic system?

For 50 years, when capitalism is raised, you have two allowable responses: celebration, cheerleading. Okay, that’s very nice. But that means you have freed that system from all criticism, from all real debate. It can indulge its worst tendencies without fear of exposure and attack. Because when you begin to criticize capitalism, you’re either told that you’re ignorant and don’t understand things, or with more dark implications, you’re somehow disloyal. You’re somehow a person who doesn’t like America or something.

I’ve experienced all those responses — the interrogation of a system with the goal of improvement, as well as the doubts about my intelligence and questions of loyalty. In fact, I’ve seen more of the latter in Cedar Rapids. There’s been more anger here than anywhere else I’ve traveled with the Capitalism Works For Me! True/False sign (not all anger, but a higher ratio). Capitalism Works For Me! True/False at the site of a controversial downtown casino proposal in Cedar Rapids, IA

Often I get asked by people approaching the sign, “what are you proposing” or sometimes told, “there is no alternative” (and the speaker is not aware of the history of that phrase). I always answer “something better” because often socialism and communism are brought up, and I try to steer people away from things they likely see as failures of the past. Usually this tactic works and we can move the conversation from a dead-ending confrontation about Capitalism/USA vs Communist and Socialist Others to place of hope and vision — the economic system is not set in stone, there can be alternatives, things can get better. Ultimately a softening of their position and opening to, what may feel like, radical new ideas. Most importantly, new ideas that are coming from within themselves.

Iowa is the first place I have met hostility to this — from a small minority of participants, but still very present. One visitor, who was an older man, owner of multiple businesses, and a Vietnam vet aggressively responded to my “something better” with “that’s weak!” The attitude was that if I was going to criticize the U.S. economic system, I better have some idea of a system to replace it — and all the better if it was something he could rip apart — but coming to the table with nothing was even worse. The idea of moving forward admitting you don’t know exactly where you’ll end up was unacceptable.

Of course, I see this approach more analogous to advising someone to continue in a romantic relationship they know is hurting them because it’s unthinkable to be with no partner at all.

Sometimes you just need to move forward into the unknown.

If the sign is asking anything, it’s asking you to check-in at the edge of that unknown.

For some, that is threatening and causes an angry and defensive response. Perhaps because it challenges a system that has treated them very well. The reaction may also be explained by what Wolff’s wife describes — that facing the system’s failures is too ugly and clinging to the ideals is more attractive. I think part of the explanation must include the simple fact that moving away from anything familiar towards an unknown is frightening.

For me, this path may be more familiar, if not still a little frightening: it’s part of the creative process. As an artist, I don’t have fully formed ideas of completed works. They come in flashes, are fleshed out in iterations, bad sketches, and progress through tests, study, conversations, and taking breaks. It’s a long journey and sometimes ideas are even abandoned along the way. All this is normal. This is how you get somewhere better. This is how you make any progress at all.

Like all creative processes, our lives also happen in iterations. Every day we come at it again, learning from the past and striving to be better. As a culture, we can do the same. The truly harmful form of conservative thinking (not in the political sense) I see here is clinging to a single world view. As Stephen Colbert put it “Thinking the same thing on Wednesday that you did on Monday. No matter what happened on Tuesday.” Going further, it’s clinging only to what one knows as most tangible and real — their singular experience of reality — closing ones eyes in the face a problem with no sure solutions.

To solve problems, we need the vision and the courage to go forward through darkness with eyes wide open.

Speaking at Camp Camp in Moldova