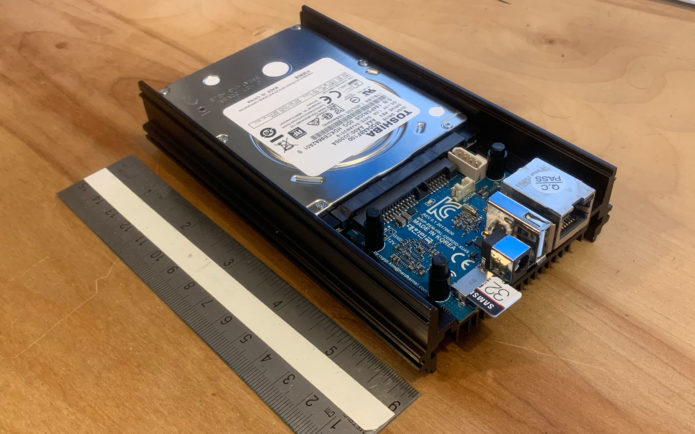 Our non-profit, the Center for Artistic Activism, used Dropbox to sync files between our small staff. Over the years, what we needed to share grew to include large slide shows used during presentations and workshops, video files we created for our site, and audio from podcasts and interviews. We outgrew the free Dropbox account (I did not want give donor money to Dropbox if we could avoid it) and ended up clumsily shifting files around to an offline archive to free up space in our account.

Meanwhile, after Snowden’s NSA revelations I’d already begun switching over to syncthing – a free software syncing utility. Files were secure and entirely under my control, and the only size limit was how much storage I had available. And no fees. The difference is, with Dropbox you have your files available 24/7 because their servers are on 24/7. For an independent system, you need two computers running to sync. With just a few machines in the system, and most of them laptops, that may not always be possible. But with a small home server that runs 24/7, some real possibilities open up.

In the past I did this kind of thing with a Raspberry Pi, but the HC-1 (Home Cloud 1) is a lot better for not much more money. This little device is a very small computer you can directly connect to a 2.5 in laptop hard drive (they make the HC-2 version for 3.5 in drives). It sips electricity and operates without a fan (the black aluminum part functions as a heat-sink), so it’s very quiet and energy-efficient – easily able to run 24/7 for weeks without a problem. It also has gigabit ethernet and a SATA connection, which really speeds things up compared to a Raspberry Pi.

We now use the HC-1 as a server for the organization. It cost us much less than Dropbox Business accounts would have, even within the first year. All told it was around $80 including the $50 HC-1, power supply, cover, and an SD card. And it’s arguably more secure (depending on how much you trust Dropbox and the NSA).

You can check out the HC-1 at AmeriDroid.

Getting into this I stumbled upon a world of a very particular kind of charitable guy (yup, it’s been all guys so far) making YouTube videos to explain and teach this stuff. They all have a particular charm and seem legitimately excited to share.

This guy runs a youtube channel called “Explaining Computers” and his very specific brand of British subdued delight shines through in the first few minutes. He is good. And thorough.

I used OpenMediaVault (OMV) to run everything by simply installing it onto a micro SD card, plugging it into the HC-1, and logging in over the network. I hadn’t used OMV before and the forums and community around it are very helpful.

Another YouTuber’s videos will get your head around OMV. Meet TechnoDadLife where “we build, learn, and create as a community.”

His walk-through can be a real time saver when getting started.

However, he’s not using the same system, so there’s a few things I learned along the way.

The following are particular to the HC’s and aren’t in the TechnoDadLife videos. They’ll make sense as you go along.

This isn’t everything you need to know, but it will lead you to it.