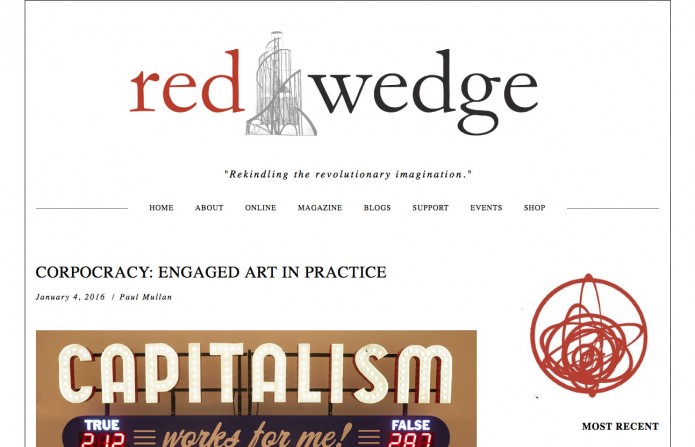 Modeled on retro, aluminum signage, with chasing lights that flicker on and off in different patterns, Steve Lambert’s Capitalism Works For Me! True/False (2011) spells out the work’s exclamatory title. Akin to something on the Las Vegas strip in the mid-twentieth century, it evokes the era’s salesmanship. That exclamation is actually posed as a question, and a scoreboard, with traditional, seven-segment digits, displays vote results from the audience. Participants select “True” or “False” on a panel with two, giant, analog pushbuttons — as with a carnival game. (At the Station, sentiments towards the economic system were almost evenly divided.)

The technology looks vintage (and there are no worries about hacked software manipulating votes). The work evokes, at one level, the dualistic choice enforced by the US electoral system, between the “salesmanship” of the Republicans and of the Democrats; or, at another level, the binary choices of public opinion surveys and ballot referenda. It also evokes simplified, popular feedback mechanisms from a time prior to the internet and dominance of social media, before someone could post elaborate, 10,000-word, blog entries about the latest outrage.

DailyServing: “The Business End of Art” by Anuradha Vikram