My work is on the cover of the August issue of Chronogram – a Hudson Valley, NY based art and culture magazine.

On The Cover: Steve Lambert 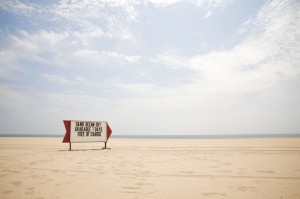 If there’s one thing Steve Lambert learned as an undercover security agent at Stanford University’s bookstore, it’s that anyone–a history professor, a freshman’s dad on Parents Weekend, an ex-felon–can try to steal a pen. After each incident, he would sit down with the offender and discuss the attempted theft often born of some psychological conflict, according to Lambert. The meetings tended to end constructively: “Maybe today can be a turning point,” he would suggest.

Lambert retired his badge years ago, but conversation remains at the core of his work. The artist/activist creates public pieces that ask viewers to consider their value systems as consumers. Advertising is a frequent subject. “I consider myself ‘media-agnostic,’” he says. “I use whatever material will work best for me.” For Lambert, this is signage; he critiques advertising using its own methods. Sand Ocean Sky–The Commons is one of a series of arrow signs Lambert fashioned and photographed around Los Angeles. The signs are witty–one reads “No Trespassing” outside of a gated home, another “You are Still Alive” beside a large cemetery–and consider how we perceive and value public space. Lambert also fights advertising with software–his web application Add-Art replaces online advertisements with art.

For Lambert, his work isn’t about feeding a message to his audience. It’s about discussion and exchange. “[In college] I would see art in galleries, stuff that looked fun to make, but not so fun to look at. It was great when I realized that art could be whatever I wanted it to be.” The desire to make art “fun” for both artist and audience has created works that require interactivity. Lambert’s piece Capitalism Works For Me! True/False is a giant traveling scoreboard, with two buttons inviting passersby to agree or disagree. It looks and feels like a game show: bright, colorful, competitive. But Lambert is more interested in stories than scores. He recalls one man who voted false in Times Square: “He was so frustrated with the broad inhumanity of economic inequality that all he could do was cry. For the piece to cause that kind of profound response felt like an incredible achievement far beyond what I ever expected.”

In 2008, Lambert collaborated with the Yes Men on The New York Times Special Edition, distributing 80,000 fake copies of only “best-case scenario” news across the country. “The point,” he says, “wasn’t to make all of those things a reality, but to enjoy walking toward them.” For Lambert, walking is talking. Lambert occasionally sets up a table with a hand-painted sign that promises, “I will talk with anyone about anything. Free!” The mobile table has proven popular; Lambert says discussions have run the gamut, from weather to Native American agricultural techniques. Whatever the subject, the artist wants to walk and talk with you.

Steve Lambert currently teaches in the New Media Program at SUNY Purchase and works from his studio in Beacon. Information on his work and upcoming exhibitions can be found on his site: Visitsteve.com.

TURN ON at KUBE

What do people say about capitalism in Cedar Rapids, Iowa?