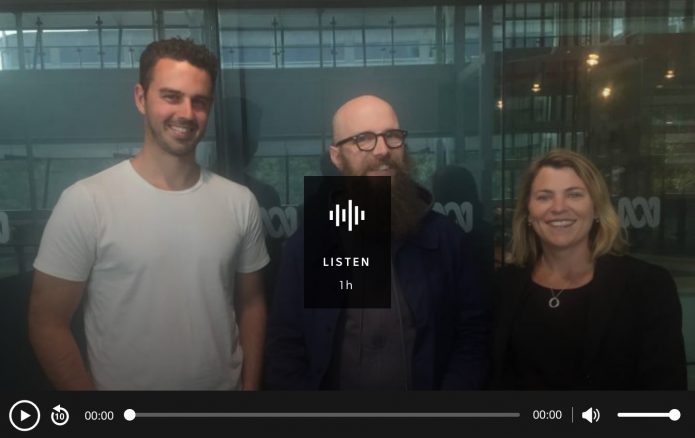 Tuesday March 20th I was on The Conversation Hour with John Faine and Dr. Andrea Carson on the Australian Broadcasting Corporation’s Radio Melbourne.

You can listen to the show on their site

Jon Faine’s co-host is Dr Andrea Carson. She’s a lecturer in political science, and an honorary fellow at the Centre for Advancing Journalism, at the University of Melbourne.

Their first guest is Pat Cunnane. He was President Barack Obama’s Senior Writer and Deputy Director of Messaging, and now writes for the TV series Designated Survivor. His new book is West Winging It: an un-Presidential memoir (Affirm Press, released 8th May 2018). You can catch him with Sally Warhaft in The Fifth Estate: The President’s Pen at The Wheeler Centre tonight (Tuesday 20th March) at 6:15pm.

Then they are joined by artist Steve Lambert. He’s the co-founder and co-director of the Centre for Artistic Activism, and Associate Professor of New Media at the State University of New York (SUNY) at Purchase. He’s in Melbourne for the Festival of Live Art exhibiting his piece Capitalism Works for Me! True/False at various places around the city. You can catch him giving an artist talk with Emily Sexton in the Experimedia Room at the State Library of Victoria tonight (20th March 2018) at 6:30pm. More information here: fola.com.au