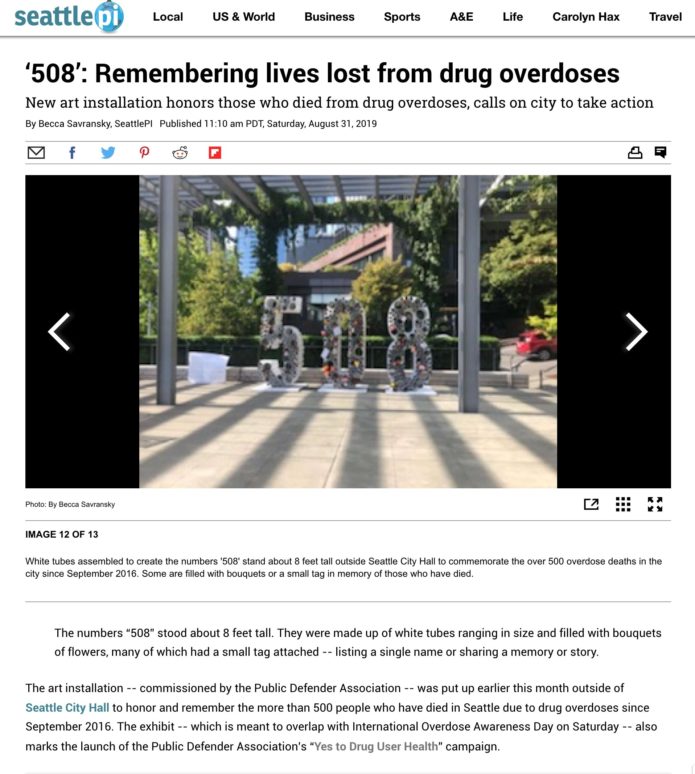 story by Becca Savransky at Seattle Post-Intelligencer about the 508 Installation at Seattle City Hall.

The numbers “508” stood about 8 feet tall. They were made up of white tubes ranging in size and filled with bouquets of flowers, many of which had a small tag attached — listing a single name or sharing a memory or story.

The art installation — commissioned by the Public Defender Association — was put up earlier this month outside of Seattle City Hall to honor and remember the more than 500 people who have died in Seattle due to drug overdoses since September 2016. The exhibit — which is meant to overlap with International Overdose Awareness Day on Saturday — also marks the launch of the Public Defender Association’s “Yes to Drug User Health” campaign.

Steve Lambert, from The Center for Artistic Activism which worked with the Public Defender Association to design and create the installation, said he hoped the piece and the interactive element showed how much the community has been affected by drug overdoses.

“Statistics are boring. Statistics don’t tell the full story of the impact,” he said.

Lambert said it’s easy to look at statistics and ignore what’s behind those numbers. The city, he said, has seen numbers on overdose deaths. The team behind the installation wanted to do something that would show more.

“508 and counting, children of families that live in the area, friends of people that are mourned, parents of kids who are no longer around, needlessly,” he said. “These deaths are preventable and they’re not numbers, they’re people.”

Read the full story at the Seattle Post-Intelligencer