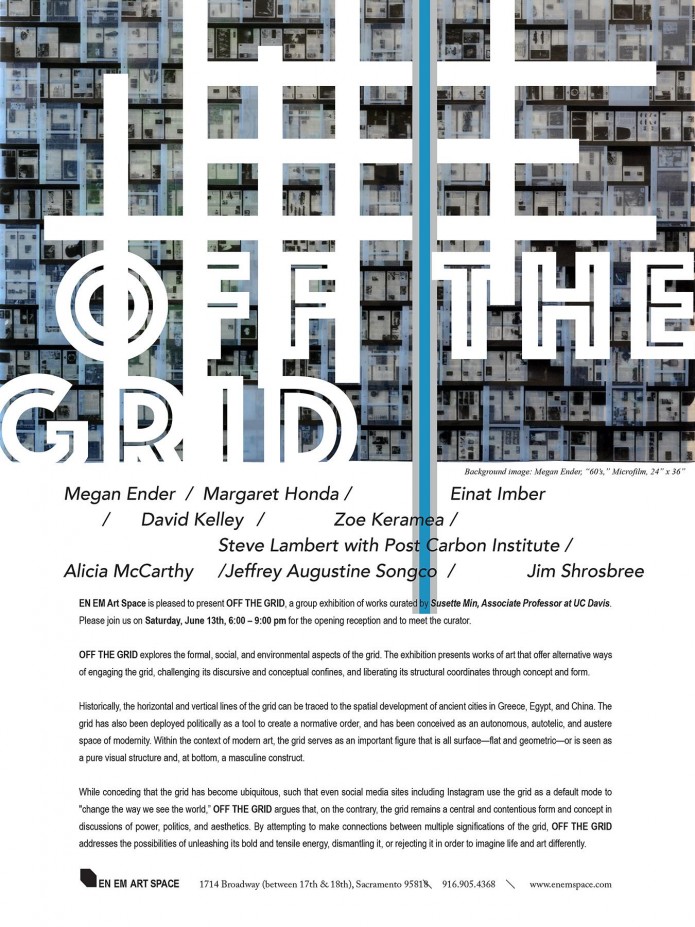 SACRAMENTO, CA (May 24, 2015)–EN EM Art Space, located at 1714 Broadway Street, is pleased to present OFF THE GRID, a group exhibition of works curated by Susette Min, Associate Professor at UC Davis. Please join us on Saturday, June 13th, 6:00 — 9:00 pm for the opening reception and to meet the curator.

OFF THE GRID explores the formal, social, and environmental aspects of the grid. The exhibition presents works of art that offer alternative ways of engaging the grid, challenging its discursive and conceptual confines, and liberating its structural coordinates through concept and form.

Historically, the horizontal and vertical lines of the grid can be traced to the spatial development of ancient cities such as Greece, Egypt, and China. The grid has also been deployed politically as a tool to create a normative order, and been conceived as an autonomous, autotelic, and austere space of modernity. Within the context of modern art, the grid serves as an important figure that is all surface — flat and geometric — or seen as a pure visual structure and, at bottom, a masculine construct.

While conceding that the grid has become ubiquitous, such that even social media sites including Instagram use the grid as a default mode to “change the way we see the world,” OFF THE GRID argues that, on the contrary, the grid remains a central and contentious form and concept in discussions of power, politics, and aesthetics.

Taking advantage of the grid’s minimalist and modular structure, Zoe Keramea and Jim Shrosbee, playfully unravel the grid, breaking open its coherent geometric pattern and internal logic, in order to re-present it in such a way so as to reveal other forms, dimensions, and patterns. While they diverge in their handling of materials and approach to the line, they share similar aims in shifting perception and manipulating marks made on the picture surface to create illusions of dimensionality and multiple associative readings.

Alicia McCarthy‘s and Jeffrey Augustine Songco’s vibrantly colorful artworks deploy the grid as a point of departure to open up the world perceptually and spiritually. Informed by but also expanding the influences of the queer and punk underground scene of the late 1990s and the Mission School, McCarthy’s mark making energizes the grid as an abstract gesture, drawing our attention to the present; defying the atemporality of the grid. The dot pixel pattern of Songco’s mixed-media canvases recall the “noise” or “snow” of analog television screens, but also could be approached as either a search for or lost signal to enter into a communion with others.

David Kelley, Margaret Honda, Megan Ender, and Einat Imber challenge the conceptual and discursive nature of the grid mobilized by architects, cartographers, urban planners, scientists, and statisticians, engaging it in such a way that critiques or draws attention away from its disciplining and ordering project. Megan Ender’s Microfilm series serves as an interface between the past and present, engaging the grid as a way to re-frame and remember a moment in history or a particular event–such as the landing of the moon and the landmark Supreme Court decision of Roe v. Wade. Recycling what some have presumed to be an outmoded form of technology as a way to archive the news events of our day, Ender also forces us to re-read these events in a way that defies the ways the grid facilitates reading and processes information. Margaret Honda uses the grid as a pictorial support to visually articulate the different rooms that make up her childhood home. At the same time, the rendering of it never materializes in that form. That is, the actual sculpture can never be assembled to the corresponding structure in correspondence with the diagram of each room. Equally important is the fact that the sculpture has never been disassembled from its grid format because the physical components did not originate in that configuration. The grid provides not only the framework for conceptualizing and possibly building this sculpture, but its presence is frustrated by how the individual components exist in the world. David Kelley’s three-channel video and photo installation conceptually undermines and plays with the ways the grid has been mobilized to organize, order, and displace bodies and contain information. Critiquing the vertical urban redevelopment and displacement of local residents from their off-the-grid housing of the favela in Eucandos, a neighborhood in Manuas, Brazil on the banks of the Amazon River, and resisting the grid as an archival means of cataloging and fixing knowledge, Kelley presents an alternative take on modernization and ethnography through a series of folding and unfolding gestures and performances. Sharing with Kelley the need to critically re-articulate the mobilization of the grid to rationalize and abstract space–Einat Imber’s beautiful cyanotypes challenge the ways the grid lulls us into engaging the world in a standardized way. Aware of how the globe is perceived as a grid of longitudes and latitudes that reinforces a predetermined system of place and time, Imber’s art practice and artworks de-naturalize our way of seeing the world and experiencing time, making the viewer aware and attentive to the slow and subtle movements of the sun.

Lastly, Steve Lambert together with the Post Carbon Institute (PCI) invites the viewer to resist the grid, to consider living off the grid. To live “off the grid” is conventionally understood in terms of living outside the system, apart from a disciplined society and/or public utilities. In collaboration with 14 other artists, the Public Energy Art Kit (P.E.A.K.) consists of a compendium of posters about the challenge of tackling climate change, energy inequality, and fossil fuel dependency. Approaching art as a means to offer an alternative matrix or course of action for living in an age of dwindling natural resources, Lambert and PCI oppose the grid as a structuring force for living life.

By attempting to make connections between multiple significations of the grid, OFF THE GRID. addresses the possibilities of unleashing its bold and tensile energy, dismantling it, or rejecting it in order to imagine life and art differently.

Susette Min is an Associate Professor in Asian American Studies at UC Davis. She teaches and writes about modern and contemporary art history, curatorial studies, Asian American Studies, ethnic American literature, and cultural studies. Formerly, she was the Curator of Contemporary Art at The Drawing Center in NYC. She has curated and managed exhibitions at the Asia Society, Berkeley Art Museum, Whitney Museum of American Art, Barnsdall Art Center, Painted Bride Art Center, Troy Arts Center, and the Los Angeles Center of Photography. She is also the Arts Editor of the journal Social Text and the North American Editor for a new journal that debuted last month, Asian Diasporic Visual Culture and the Americas (ADVA).