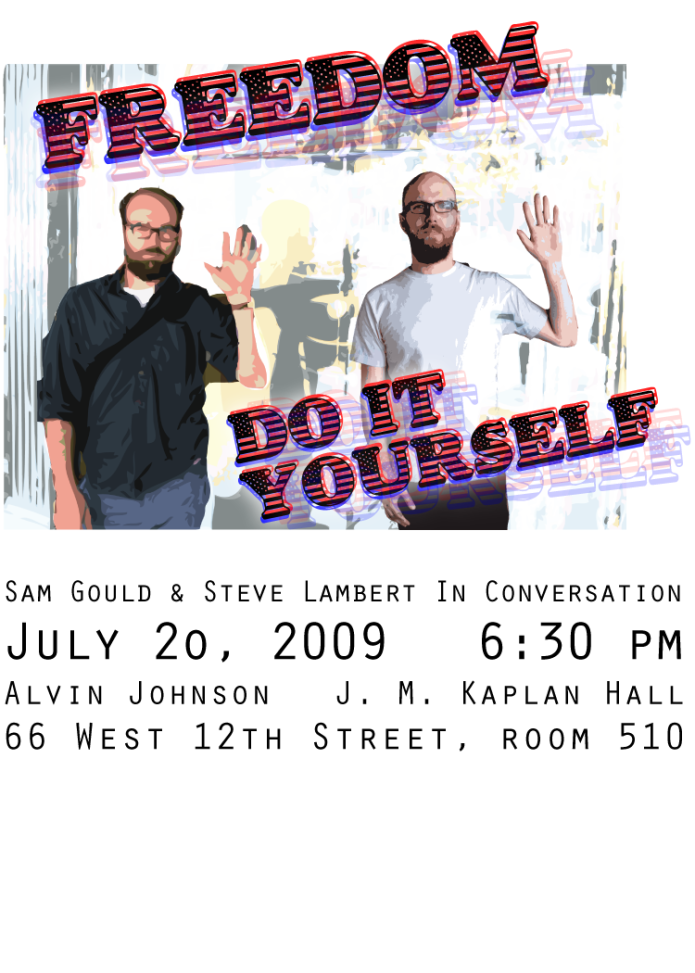 A tricky word, Freedom is usually considered the cornerstone of democracy. All too often the concept is warped, mangled, and spun to benefit those using it to control and usurp power for their own political and monetary gain. Artists Steve Lambert and Sam Gould display what they acknowledge is an unhealthy obsession with other kinds freedom, concepts that will fuel the conversation among them.

Using art as a hybrid of collective action, public demonstration, comedy, and the discussion of what America, and the world, could be–if only we were willing to ask questions, and to fail–Lambert and Gould’s practice aims to dismantle and flatten common notions of power, history, and individual responsibility.

Over the last ten years, Gould and Lambert have staged collective public discussions; produced innumerable free publications; created illegal bars and restaurants; looked to the creative disruption of military recruitment; systematically shut down every McDonald’s in New York City; and distributed over one million copies of a special edition of the New York Times announcing a utopian future.

In this public discussion the pair highlight their projects (through groups such as Red76 and the Anti-Advertising Agency), which often borrow from other disciplines and genres, including history, marketing, consumerism, punk rock, indie rock, and entertainment. The two also discuss artists and groups who utilize similar models of action and process, teasing out a picture of a murky strain of aesthetic practice that, while not shunning the benefits of the traditional art world, sees the greatest benefit when it adapts its language to engage a broader audience (or, to be more accurate, everyone in the entire world).

Sam Gould
Founded in January of 2000 in Portland, Oregon, Red76 is the moniker for collaboratively based initiatives conceived, most often, by Sam Gould, and fleshed out by a group of collaborators across the United States and abroad, who have included; Khris Soden, Zefrey Throwell, Paige Saez, Colin Beattie, Jen Rhoads, Laura Baldwin, Gabriel Mindel Saloman, Dan S. Wang and many others. Often situating themselves in public space, or creating an atmosphere wherein the definition of space may have an opportunity to redefine itself, Red76 initiatives utilize overlooked histories and common shared occurrences as a means of creating a framework in which to construct their public inquiries.

Gould is a founding member of MessHall, an experimental social space on the North Side of Chicago. He is also the editor of the Journal of Radical Shimming and co-editor, along with John Vitale, of “…….” (dots and quotes), a free arts publication, that is distributed internationally and was last sponsored by the Lower Manhattan Cultural Council. In 2006 Gould was one of nine nominees’ for the Menil Collection’s Walter Hopps Award for Curatorial Achievement.

Along with producing many independent initiatives, Gould and Red76 have engaged in projects commissioned by the Institute of Contemporary Art Philadelphia, the Drawing Center, the Yerba Buena Center for the Arts, the Lower Manhattan Cultural Council, SF MoMA, Printed Matter, Creative Time, the Douglas F. Cooley Memorial Gallery at Reed College, 01 San Jose, and many others.

Steve Lambert was born in Los Angeles in 1976 and moved to the Bay Area four days later. His father, a former Franciscan monk, and his mother, an ex-Dominican nun, imbued the values of dedication, study, poverty, and service to others–qualities which prepared him for life as an artist.

Steve Lambert recently made international news with the New York Times “Special Edition,” a replica of the grey lady announcing the end of the wars in Iraq and Afghanistan and other good news. He is the founder of the Anti-Advertising Agency, lead developer of Add-Art (a Firefox add-on that replaces online advertising with art) and has collaborated with numerous artists including the Graffiti Research Lab and the Yes Men. Steve’s projects and art works have won awards from Rhizome/The New Museum, Turbulence, the Creative Work Fund, Adbusters Media Foundation, the California Arts Council, and others. His work has been shown at various galleries, art spaces, and museums both nationally and internationally, and was recently collected by the Library of Congress. Lambert has appeared live on NPR, the BBC, and CNN, and been reported on in multiple outlets including Associated Press, the New York Times, the Guardian, Harper’s, The Believer, Good, Dwell, ARTnews, Punk Planet, and Newsweek. He is a Senior Fellow at the Eyebeam Center for Art and Technology in New York, and teaches at Parsons The New School for Design and Hunter College. Lambert studied sociology and film before receiving a BFA from the San Francisco Art Institute in 2000 and a MFA at UC Davis in 2006. He dropped out of high school in 1993.

The Flying University is a Red76 project. Red76 is going to be doing a project called Pop-Up Book Academy in Sam Gould’s hotel room on →