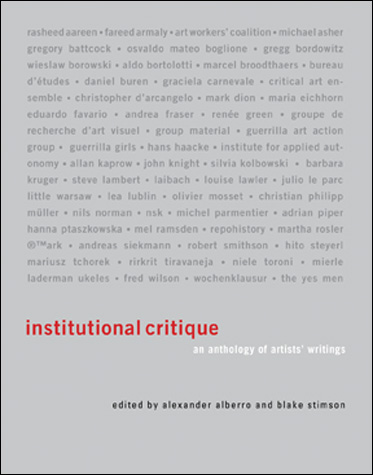 Blake Stimson has included my piece, The Emma Goldman Institute for Anarchist Studies, in his new book, Institutional Critique: An Anthology of Artists’ Writings.

From the MIT site: “Institutional critique” is an artistic practice that reflects critically on its own place within galleries and museums and on the concept and social function of art itself. Such concerns have always been a part of modern art but took on new urgency at the end of the 1960s, when–driven by the social upheaval of the time and enabled by the tools and techniques of conceptual art–institutional critique emerged as a genre. This anthology traces the development of institutional critique as an artistic concern from the 1960s to the present, gathering writings and representative art projects of artists who developed and extended the genre. The artists come from across Europe and throughout North America. The texts and artworks included are notable for the range of perspectives and positions they reflect, and for their influence in pushing the boundaries of what is meant by institutional critique.

Like Alberro and Stimson’s Conceptual Art: A Critical Anthology, this volume will shed new light on its subject through its critical and historical framing. Even readers already familiar with institutional critique will come away from this book with a greater and often redirected understanding of its significance.

I have a piece in the upcoming Beautiful Trouble book

Beautiful Trouble is a collection of tactics and strategies for Creative Activism. Seven grassroots groups are contributing their best ideas, including Agit-Pop/The Other 98%, The →

What is Trespass? A beautiful new book of “Uncommissioned Urban Art” compiled by the folks from Wooster Collective. I will be at the Taschen Books →