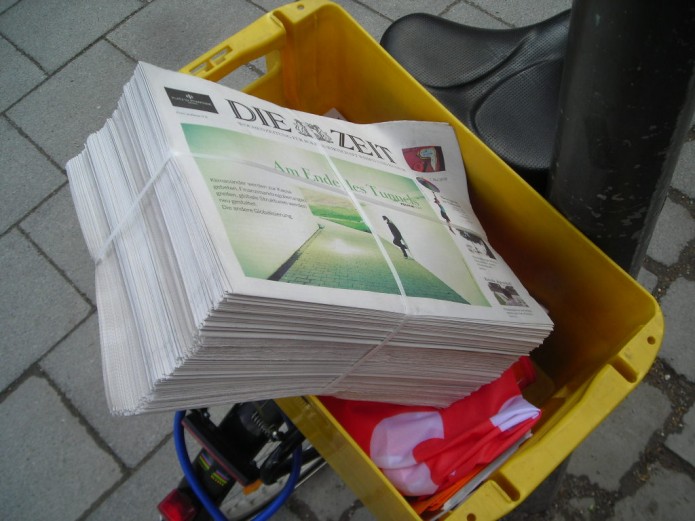 I’m honored and tickled that a group in Germany has used our utopic future newspaper concept! I believe Andy and I talked briefly with some people in Germany who were planning something…

What will the world be like a year from now? Left-wing activist group Attac publicized their ideas by printing realistic-looking copies of a prominent German newspaper — dated May 1, 2010.

Attac activists distributed 150,000 copies of their faked, eight-page version of the German weekly Die Zeit in over 90 cities across the country.

With the top headline “At the end of the tunnel,” the paper presented reports the group said it thinks can become reality within 13 months.

“We fast forwarded time and wrote about the news we want to read about tomorrow — not about some distant paradise, but about concrete changes that are conceivable and attainable,” she added.

Articles describe the beginning of a “new era,” where banks have been nationalized, the Group of 20 industrialized and emerging countries see eye to eye, and polluters are taken to task.

Attac mimicked the weekly newspaper’s format down to the last detail, though the final version was a bit smaller. They also recreated an equally detailed online version.

Die Zeit said it would not take legal action against the group.

“Naturally, we can never endorse an imitation of Die Zeit in print or online, particularly not in quality as good as this,” said the paper’s editor-in-chief, Giovanni di Lorenzo. “But it’s not surprising that Attac chose Die Zeit for this campaign, as it’s the largest national newspaper of quality.”

The paper has a circulation of over half a million.

In a similar campaign, the American activist group Yes-Men published a false version of The New York Times. 2019 Biennale of Design at Saint Etienne

Through Nov 23rd, the New York Times Special Edition is part of  Unrest: Art, Activism, & Revolution at the Helen Day Art Center About the →

…Is This Free? at NURTUREart

The New York Times Special Edition will be included in “…Is This Free?” …Is This Free? is NURTUREart’s 2012 summer exhibition series. Curated by Marco →

False Documents and Other Illusions at Portland Art Museum

False Documents and Other Illusions, looks at the various ways in which contemporary artists approach the idea of  trompe l’oei, lillusion, or fooling the eye. →