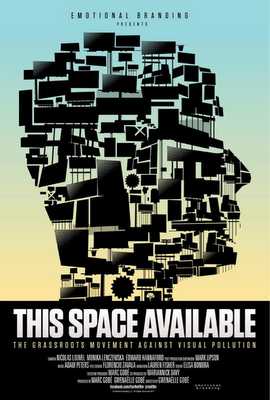 I did an interview for the film, “This Space Available: The Grassroots Movement Against Visual Pollution” and it’s premiering at IFC Center in New York next month. Jordan Seiler of Public Ad Campaign is also in the film.

Billboards and commercial messages dominate the public space like never before. But is a movement taking shape to reverse this trend?

In This Space Available, filmmaker Gwenaëlle Gobé says yes. Influenced by the writing of her father, Marc Gobé (Emotional Branding), this new director brings energy and urgency to stories of people around the world fighting to reclaim their public spaces from visual pollution.
From 240 hours of film, 160 interviews and visits to 11 countries on five continents, This Space Available charts a fascinating variety of struggles against unchecked advertising and suggests that more than aesthetics is at stake. If Jacques Attali once called noise pollution an act of violence, is visual pollution also such an act? Should we also consider, as one Mumbai resident says, “which classes of society can write their messages on the city and which classes of society are marginalized?”
Gobé offers a canny generational analysis of visual pollution, laying blame not just with the advertising juggernaut but also an entire generation of Baby Boomers, whose consumption-based culture has implicated them in the environmental fallout. She argues that it’s her generation, left to do the cleaning up, that is now leading the fight back.But the filmmaker also recognizes the history and politics behind this fight. Turning to such legislation as the Highway Beautification Act of 1965, Gobé shows how the enforcement of this landmark law, designed to regulate outdoor advertising on America’s roadways, has steadily eroded. And today, public space activist Jordan Seiler faces harsh penalties for covering illegal outdoor ads with art, while officials turn a blind eye to illegally erected billboards.

Still, the film strikes a hopeful tone. A standout interview features Gilberto Kassab, the popular mayor of Sao Paulo, who threw a stone into the quiet pond of the billboard industry by successfully banning outdoor media in his city — the eighth largest in the world. The move is not without precedent: Houston’s 1980 billboard ban was also a deliberate tactic to improve its flagging image, economic competitiveness, and quality of life.

In the end, This Space Available challenges audiences to recognize that aesthetics and beauty go hand in hand with responsibility. Gobé asks why brands continue to ally themselves with an industry that cuts down trees, hogs energy, and spends its profits in courts and statehouse lobbies, especially while younger consumers push for improved corporate citizenship? And is everyone equally to blame for enabling the spread of visual pollution, while other humble individuals show that it’s possible to reverse it?

The film navigates these issues without promoting a universal solution. Gobé instead weaves together stories reflecting diverse local responses to an increasingly global condition. This Space Available compels audiences to consider these stories long after the film ends, or at least to remember them each time we speed by a billboard.

Today We Are Alive

I’m calling it a lecture/performance because I don’t know what exactly to call it. I’ll just say I’m taking my talks further into a direction →