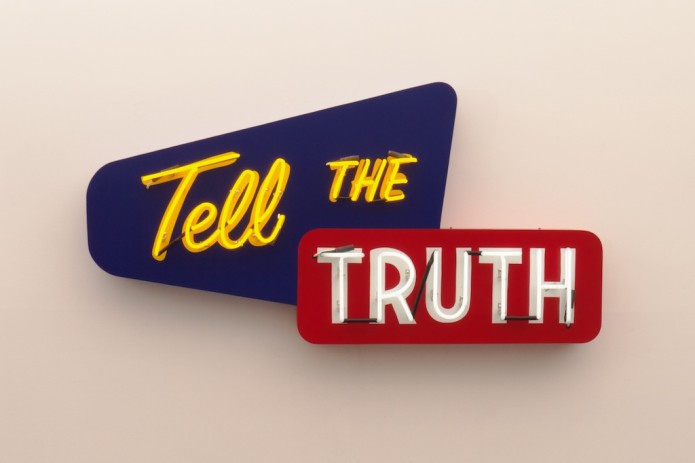 The center piece of Lambert’s upcoming show is Capitalism Works For Me! True/False, which is on a nationwide tour of museums, non-profits and public spaces in 2011 and 2012. The sign has been exhibited in Cleveland, Boston, San Diego, and Santa Fe, NM so far this year, and its travels will continue after the gallery show concludes in October. The Capitalism project is among Lambert’s most ambitious to date, in both its scale and its level of provocation. The sign itself blares a question seldom posed so clearly, while also serving to divine public opinion and understanding about capitalism. At every stop on the sign’s aforementioned tour, Lambert interviews viewers about their experience of the piece, posing whether capitalism does in fact ‘work for them’. These video-captured testimonials illustrate how people define and understand capitalism, and their relationship to it.

Lambert will also present five new sign sculptures that amplify the question(s) posed in Capitalism. If the Capitalism project asks its question(s) to the vox populi, this group of five new sign sculptures speaks directly to the demographic of people equipped to acquire them. Reflecting a fresh awareness that a broad swath of corporate and individual 1%-ers have collected his work over three years of gallery exhibitions, Lambert has decided to create visual reminders, admonitions, and encouragements to those in positions to collect the work. Using combinations of neon and incandescent lights, one piece exclaims GIVE AND GIVE AND GIVE! Another reminds viewers to TELL THE TRUTH, while another one warns of the inverse relationship that can operate between WEALTH and HAPPINESS.

A book compiling the tour of the Capitalism project, including this gallery exhibition, is being compiled now and will be published in 2013.

Steve Lambert (b.1976 Los Angeles) is cofounder and director of the Center for Artistic Activism and recently accepted a faculty appointment to SUNY Purchase. His work has been exhibited internationally and is in the permanent collections of the Sheldon Museum, the Progressive Insurance Company collection and the US Library of Congress, among others. He has collaborated with the Yes Men, winning awards from Prix Arts Electronica, Rhizome/The New Museum, the Creative Work Fund, Adbusters Media Foundation, the California Arts Council, and others. Previous to his SUNY appointment Lambert was a faculty member at SMFA Boston, and a Senior Fellow at the Eyebeam Center for Arts and Technology before that. Lambert earned his BFA at the San Francisco Art Institute and his MFA from UC Davis. Lambert lives and works in Beacon, NY.