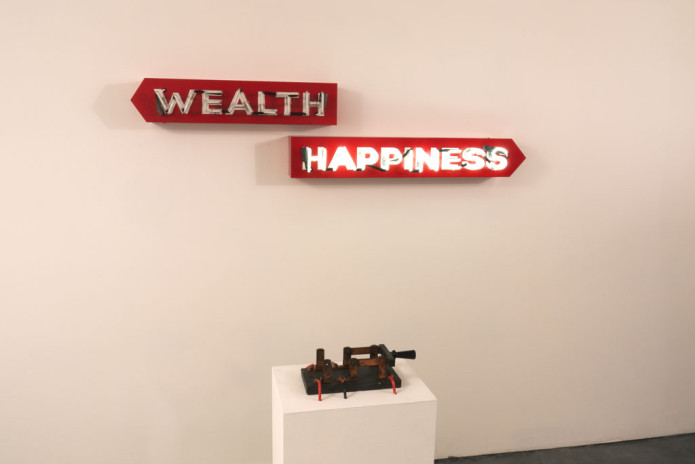 Currency: What do you value?

Currency: What do you value? is a group exhibition that asks questions about the relationship between art and money, exploring the flaws of our current economic reality. The featured artists expose the complex relationships between currency and how society values or doesn’t value art, work and time. They employ wit and satire to reveal economic inequities and dysfunctions, and ask: how do materialism and corporate interests take precedence over human and environmental concerns? How do debt and money impact art and creativity?

Literary critic and philosopher Mikhail Bakhtin described the concept of the carnival as a subversive, disruptive, world-upside-down event in which the hypocrisy of everyday life was unmasked. During carnival, social structures including those that defined class and status were disrupted by common people. In Currency: What do you value?, artists turn assumptions upside down to re-examine our relationship to money and how we live our lives.

The exhibition brings together national, international and local artists who engage with these themes through a variety of media and artistic approaches. In Debtfair, Occupy Museums continues their ongoing intervention that began at Art League Houston and appeared at the Whitney Biennial in 2017. The collective asks New Mexico artists how debt affects them and their art and uses collected data to explore the real impacts of debt at a time when U.S. credit card debt alone is over one trillion dollars. Albuquerque artist Leonard Fresquez has organized The New Booleggers: Fabricating (Im)Propriety, an installation in which 20 artists explore how high-end commodities are valued and question the worth of such products by producing knock-off versions of popular items.

New York artist Evan Desmond Yee fossilizes outmoded technologies including specific Apple products. He demonstrates how these objects, that have such a hold on us, quickly lose their novelty as they become obsolete. By placing the objects in a geologic context, he also raises questions around corporate influence, environmental neglect and a future in which nature reclaims its place over technology. Mel Chin’s Fundred project is continued as an outreach program with local schools involving hand-made currency used to raise awareness about lead poisoning.

Josie Lopez, PhD, Curator a 516 ARTS, was born and raised in Albuquerque. She received her B.A. in History and M.A. in Teaching from Brown University. She completed an M.A. in Art History at the University of New Mexico and her Ph.D. from the University of California, Berkeley. Her research interests include examining art as a discursive agent in the political arena, modern and contemporary Latin American art, 19th century France and Mexico, and the history of New Mexican art with a focus on printmaking. Lopez recently wrote the book The Carved Line: Block Printmaking in New Mexico and curated the accompanying exhibition at the Albuquerque Museum. Lopez has been the Jacob K. Javits Fellow and an Eleanor Tufts Fellows. She has taught courses on modern Mexico and the prints of Francisco Goya at SMU, and courses on the history of printmaking and European art at the University of New Mexico.

Manuel Montoya, PhD, is an Associate Professor of Global Structures and International Management at the University of New Mexico’s Anderson School of Management. He was born and raised in Mora, New Mexico, and received his B.A. in English Literature and Economics from the University of New Mexico. He has Master’s degrees from Oxford University and NYU as a Truman Scholar and Rhodes Scholar. He received his Ph.D. at Emory University in Foreign Relations and Comparative Literature as a George Woodruff Scholar and a UNM Center for Regional Studies Fellow. His research interests mainly focus on a concept he refers to as “global legibility,” the process whereby humans conceptualize the planet and make it a meaningful part of their realities. This work incorporates ideas drawn from studies in Global Political Economy, Emerging Markets, Creative Economy, and Critical Management Studies.

It’s Not Us, It’s You – at San Jose Institute of Contemporary Art

Go and see work I prepared special for this show entitled, Steve Lambert refused to participate in this exhibition because the San Jose Institute of →

The Offices of the Anti-Advertising Agency