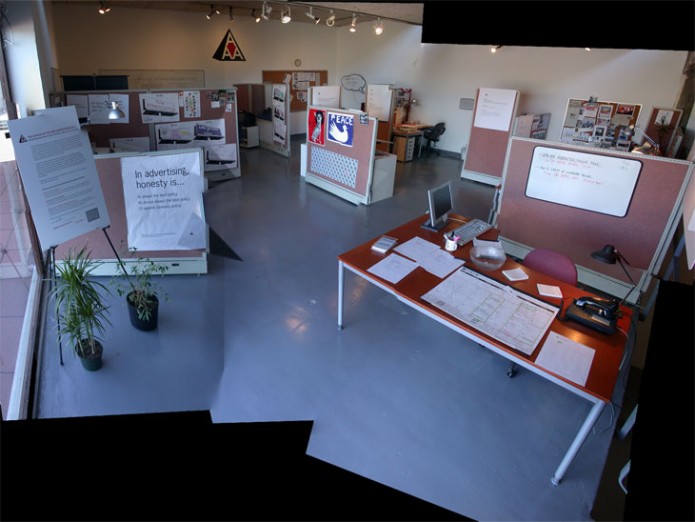 In early 2004 the Anti-Advertising Agency was offered a show at the McBean Project Space at the San Francisco Art Institute. I had never thought about how the AAA would be presented within a gallery – the project was always oriented towards public spaces. However, after some thought, I realized that the space could be used as a “home base” for the Agency, both for its members and the public. This would make us more available to the public, our work more “transparent” (as they say in business), and more accountable to anyone who wanted to talk to us. For the Agency itself, it would give us a central place to work and meet. This idea evolved into creating offices within the gallery space that would function both as a working office and as an exhibit of the AAA’s works.

We collected cubicle walls, desks, chairs, a conference table, filing cabinets, typewriters, and computers to set the stage. Then the various members of the AAA moved in, bringing their books, notes, drawings, and other material related (and sometimes not related) to the AAA projects. Each project had a desk. Additional areas were carved out for a conference room, graphics design studio area, and CEOs office. Some sineage was posted, but primarily visitors learned about the work through snooping and discovering as they browsed through the workspace. Members of the agency showed up to work in the space throughout the exhibition, we held focus groups in the conference room, public meetings, and weekly events. A calendar was available so that anyone who came in could make an appointment with me, the CEO of the Agency, to discuss whatever they liked.

The office was so convincing some asked if they were allowed in once they entered. At the time, many of the Art Institute’s spaces were being converted to office spaces, so it was theoretically possible that the gallery could have become an office in real life.

There are photos and more information at the Anti-Advertising Agency site.

I am exhibiting with Charlie James Gallery at the San Francisco Fine Art Fair. All my hometown friends, please stop by and say hello to →

I’m calling it a lecture/performance because I don’t know what exactly to call it. I’ll just say I’m taking my talks further into a direction →

“Where Lives Come to Die” with Scott V. from Oakland

Next week I’ll be heading out on the Eyebeam Roadshow. We’ve covered Chicago and Iowa City in the past, and now we’re touring California. November →

Postcards From Our Awesome Future in SPUR’s Urbanist Magazine