is preparing for the Frank Gathering.
Creative Commons
BY-NC-SA 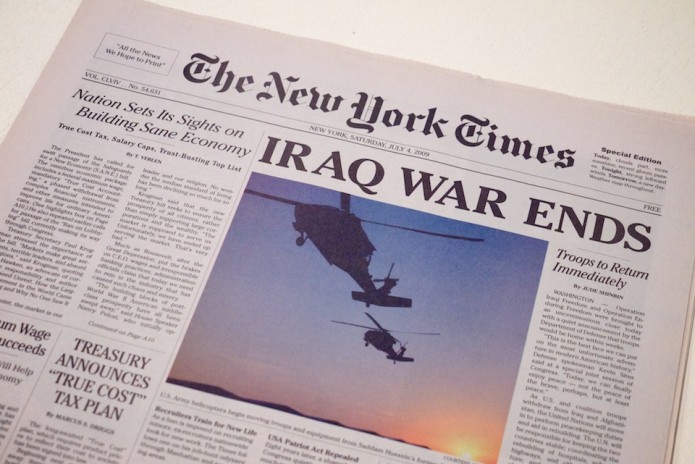 A celebration/collaboration with Steve Lambert, Andy Bichlbaum of The Yes Men, along with 30 writers, 50 advisors, around 1000 volunteer distributors, CODEPINK, May First/People Link, Evil Twin, Improv Everywhere and Not An Alternative.

On November twelfth, 2008, over 80,000 copies of a replica of the New York Times were distributed in several cities around the United States. The paper included 14 pages of “best case scenario” news set nine months in the future.

Activists often take the the role of critics. We march in response to current events carrying signs that say “NO ______!” “DON’T ____!” and “STOP _____!” It’s inherently reactive, negative, and critical instead of constructive and visionary. And it’s done over and over again.

After the 2008 election of Barack Obama much of the United States population was excited about the future for the first time in years. With the Special Edition, we wanted to find a way to celebrate what we wanted, rather than criticize what we didn’t. We wanted to create our own vision instead of responding to others.

One week after the election a newspaper hit the streets with the surprising headline: “IRAQ WAR ENDS”

Over 80,000 copies of this “Special Edition” of the New York Times were placed directly in commuters hands, free of charge, in several cities around the United States. The paper closely matched the design, look, and feel of Times in every way but for a few small details. For example:

Inside were 14 pages of “best case scenario” news that describing the world as it could be eight months in the future.

The paper included World, National, Business, and Local sections with hypothetical headlines like “Maximum Wage Law Passes Congress,”  “USA Patriot Act repealed,” and “All Public Universities To Be Free.” Each story provided a fictional history of how such a thing could happen on such a timeline through grass-roots pressure using real-world details. A replica of the New York Times website mirrored the stories online and was visited by over 300,000 people in the first two days.

After 15 seconds there were enough clues that people could figure out what was going on. The goal of the organizers was not to have anyone feel “tricked” or the butt of a joke, but to be welcomed in to an inside joke that could be shared with friends. The reaction on the street was overwhelmingly positive.

The project brought together dozens of activists in a collaborative vision of what could be possible (or just on the edge of possible) in a world where we’ve won every battle. More than an incredible, highly coordinated stunt, it was an utopian vision written in a familiar language that involved thousands of volunteers and reached around the world. It ruptured the present and vividly revealed a better world.

(There’s lots more media attached to this which I plan on adding someday.)

Photographers
CONWAY LIAO
JON COHRS
ELSPETH ROUNDTREE
And many others

This project was also worked under the following names: the Fake New York Times, Spoof New York Times, The New York Times Hoax, Iraq War Ends, Because We Want It, The End of the War of the Worlds, The Massive Power Shifting Exercise, The Good News, etc.

A copy of the The New York Times Special Edition can be borrowed for exhibitions from:

2019 Biennale of Design at Saint Etienne