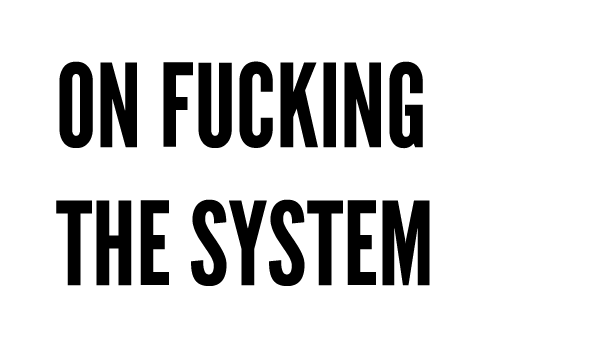 This was written as an introduction to Abbie Hoffman’s pamphlet, Fuck The System for WoodenLeg Press.

Before the web, there was a small publisher in Port Townsend, Washington called Loompanics. Curious how to pick locks, or how to dumpster dive? Your rights when stopped by a police officer? How to make your living driving brand new Winnebagos from the factory to the dealer? Get a second drivers license with another identity? 20 years ago I certainly was and Loompanics books held the answers.

Each short description in the Loompanics Annual Catalog made another small fissure in my little reality, allowing it to expand. Sitting in my childhood bedroom in San Mateo, California I discovered opportunities that would frighten any high school guidance counselor. I could imagine having two social security numbers, making free calls at payphones with a mysterious home-made electronic device, finding perfectly good meals in dumpsters, and picking locks for fun.

Here I am today. No, I’m not writing from the back of someone else’s Recreational Vehicle. I’ve never really picked a lock. It’s rarely a direct path from ones influence to their outcome, but those influences aren’t to be discounted. Those influences open doors to paths we never knew existed. They give us choices. They give us a kind of freedom.

Loompanics went out of business in 2005. I’ll bet in large part due to their brand of information being more accessible than ever online. As much as record companies and book publishers cry about the internet putting them out of business, if it was ever true it was for Loompanics. Search now and it’s all there in one form or another, free of charge. Their stock and trade was what early hackers talked about when they declared, “information wants to be free.”

Frankly, Fuck The System is just as outdated. Today the information in this book is much easier to find. Yet somehow Fuck The System remains exciting because all the schemes and plans were captured in one powerful pamphlet. Yes, the addresses and phone numbers in the pages that follow have probably changed. And indeed, it’s simply not advantageous to counterfeit subway tokens anymore. Still, as irrelevant as some of the details are, one can’t help but wonder: can the “drop-out” life be lived? Can one truly hustle their way through? Wait, could one quit their job… in New York City… and everything, everything be ok?

Levitating the Pentagon, running a pig in an election; Abbie Hoffman’s medium of choice was fiction, exaggeration, and myth-making. Some say many of the dollars dropped on the trading floor in his most famous stunt were fakes. Even “George Metesky” the alter-ego attributed as Fuck The System’s author is a fictionalized character.

In our brains we make our own fictions and exaggerations, just less ambitious. Internally we spin personal, mundane mini-myths about a better future — someday, I’ll get out of bed earlier, I’ll start that diet and workout routine, maybe even get a better job. These fantasies have their function, but they can run in circles for years. This is why successful smoking cessation programs begin with a “quit date.” A smoker can long contemplate giving up the habit, but when they decide, “my quit date is the 31st” that abstract idea becomes a plan. This difference is important: things shift when you have a plan. With this pamphlet Hoffman distributed radical plans.

Skeptics can question whether or not Fuck The System is entirely practical. Despite it’s title, it’s not really about “smashing the system” but how to use it. How to live off it’s excess, leverage it. How to hack it. Without the system, none of these things would work. In fact, many don’t realize, it was commissioned by “The System.” While it didn’t turn out exactly how they hoped, The Mayor of New York, John Lindsay, had the pamphlet commissioned through a subterfuge of funding.

But who cares? Who cares if Fuck The System wasn’t wholly comprehensive, or might not work, or was paid for by the mayor? Who cares if the real George Metesky wasn’t a hero but simply a lunatic. That was Hoffman’s way — and it’s more fun. Did trading truly grind to a halt when Hoffman and his cohorts threw real (and fake) dollar bills off the balcony? More importantly, why does it matter?

Perhaps with this book Hoffman was crafting another legend. Perhaps this pamphlet’s role is more vision than reality. That has value. The legend has value. The value in the pages of Fuck The System was placing a practical step between contemplation and action. Inspiration, even false, is also not to be discounted. False hopes are so powerful they’re able to keep “The System” alive. But it can work the other way too. These dreams get people believing, “Other people are doing this. It is possible to make it work. There is a choice. There is another way.” In that way, Fuck The System becomes as much “how to” as it is “what could be.”

So can the “drop-out” life be lived? Can one hustle their way through? Could one quit their job in New York City and everything be ok? Is it all a myth?

Most importantly, what kind of fissures are created in our reality when looking at our lives and asking those questions? What door is Abbie Hoffman opening? What choices are we given?