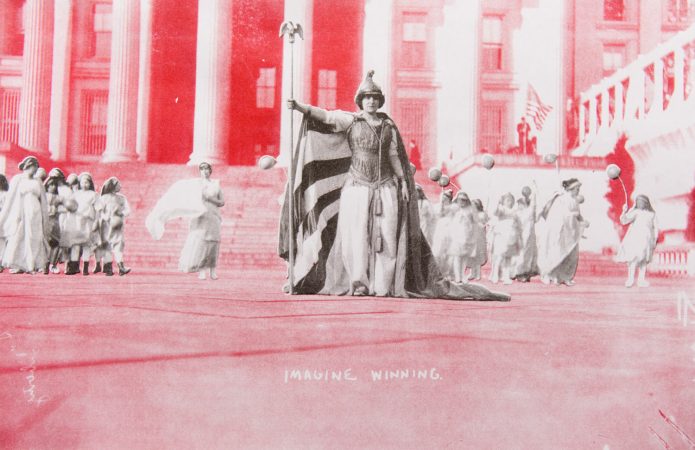 Created in edition of 100 as thank you for the Center for Artistic Activism end of year fundraising campaign.

The IMAGINE WINNING print features an image from the 1913 Suffrage Pageant in Washington, D.C., with the actress Hedwig Reicher as Columbia. On March 3, 1913 more than 8000 women took to the streets with incredible costumes, nine bands, four brigades on horseback, 20 floats, and this performance near the Treasury Building. This was the beginning of photography and already these women knew how to craft a photo. The marchers were demanding an amendment to the Constitution but were harassed and assaulted by mobs of thousands of men as police looked on. The suffragettes were undeterred and the struggle continued throughout the country. In 1920, the Nineteenth Amendment secured the vote for women.

The print is made with a Risograph printer. Similar to silkscreening, riso printing enables a layering technique to produce multi-colored prints. It’s printed on high-quality Speckletone paper, the first-ever recycled sheet with flecks and “shives” created in 1955 by the French Paper Co.