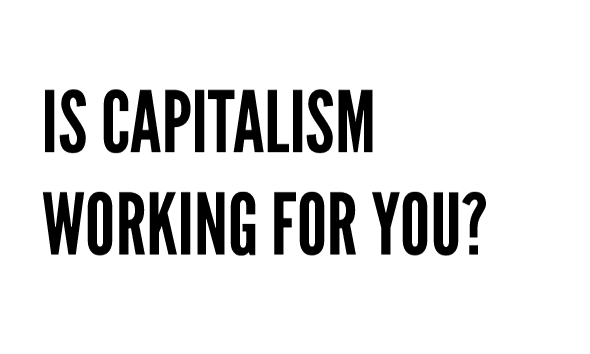 Or so I’ve been told by countless people across the United States when showing Capitalism Works for Me! (True/False), a 20-foot-long sign with flashing lights and a scoreboard. People passing by can publicly decide whether capitalism serves them well by pressing one of two buttons: True or False. From Times Square, with its giant flickering billboards, to a small arts venue in Cleveland, the answers I receive have varied, but the score is often close to even. Most people struggle to decide, and many list numerous reasons why they vote the way they do. Some of these make more sense than others.

Of all the myths about capitalism, the notion that “capitalism works if you’re willing to work hard” is the most stubborn.

Why ask? Capitalism is woven into nearly every aspect of our lives, yet it’s rarely subject to substantive conversation. The nightly news may take as its focus “the economy” or “jobs,” but capitalism is the economic system that dare not speak its name. If we’re to move forward as a society, capitalism needs to be up for serious discussion, honest evaluation and, ultimately, systemic change. Having this conversation is not easy, as I’ve discovered. Capitalism is often discussed — even dismantled — in academia, but not in terms that make sense to non-specialists. Meanwhile it is rarely examined in popular culture with the depth and complexity it requires, so encouraging people to personally evaluate it doesn’t necessarily lead to a profound intellectual conversation.

The purpose of Capitalism Works for Me! is to prompt a cognitive struggle in a down-to-earth, humorous way. However, people usually first react to the piece by falling back on the comfort of abstractions and repeating popular myths. For example, the true/false dilemma is much easier to resolve when the only alternatives to capitalism are presumed to be failed communist dictatorships. It’s also much easier to pretend that the only “true” definition of capitalism is the kind of free-market extreme idolized by thinkers like Ayn Rand and Friedrich Hayek but never seen in the real world.

My job is to disrupt this pattern. Over the three years that I’ve been presenting Capitalism Works For Me!, I’ve learned to redirect the conversation from such oversimplifications. Generally we move on from knee-jerk reactions within a couple of minutes to have profound discussions about how economics impact people’s everyday lives. But the notion that “capitalism works if you’re willing to work hard” keeps coming up. Of all the myths about capitalism, it is the most stubborn. I started to wonder why.

When you think about why people succeed, working nights and weekends comes to mind much more readily than factors we have little control over, such as a stable home life, place of birth, neighborhood poverty levels, family income, access to education, health, a supportive partner, tax breaks, local infrastructure and regional environmental protections. These are some of the conditions that sociologists consider when studying economic mobility. They make a lot of sense, but they’re not the first things on people’s minds if they’ve spent years burning the midnight oil to get where they are. Nor do they make for a heroic story.

The idea that folks may not get what they deserve — that our culture is not a meritocracy — can be very threatening.

In general, it’s uncontroversial to point out that hard work is not the only reason for success. It gets a little more difficult when you’re standing in Times Square opposite a stern, white-haired, white male Vietnam War veteran on vacation who is slightly irritated that capitalism is being evaluated at all. So rather than try to explain what privilege is at an abstract level, I bring up someone else I met. “There was a person here a few minutes ago who agreed that hard work is important and who wanted to work but was forced into retirement because he became ‘overqualified’ when a new company took ownership at the factory where he worked. What do I tell him?”

And the white-haired man softens, shrugs a bit and tells me, “Hm, yeah, that happens.” Because it does, and it’s happened to someone he knows. He thinks for a moment, his energy returning, and adds, “I would tell that person not only do you have to work hard, you also have to work smart — if you can stay abreast of the changing business climate and adapt to current conditions, you’ll be OK.”

I’ve always found the formulation “work hard, work smart” disturbing. When you invert the expression, it implies: if capitalism doesn’t work for you (that is, if you’re poor, out of work or have a demeaning job), it’s your fault. To put it more bluntly, you are lazy and stupid.

As I’m figuring out a polite way to say all this, the man offers a concession.

“There is a problem with greed,” he admits.

We arrive at another pillar of the mythology: If there is a problem with capitalism, it is with the greedy few who occasionally foul up the system for the rest of us.

Now we have the complete legend. The system works. If you work hard and you’re smart, you can get ahead. But the greedy few are a problem.

At an individual level, this belief system makes sense. After all what adult doesn’t think she works hard? Who doesn’t think he’s smart? Who — besides a few real-life sociopathic Gordon Gekkos on Wall Street — actually thinks greed is good?

Yet at a global level such thinking immediately falls apart. The 85 richest people in the world hold as much wealth as today’s “other half” — 3.5 billion of the world’s 7 billion humans. Who thinks that’s a fair system? Who believes that Indian farmers and Bangladeshi factory workers aren’t working hard? How can it be acceptable that anyone, let alone 2.4 billion people, lives on less than $2 a day?

The moments when myths were vehemently defended were simultaneously frustrating and fascinating. Thoughtful conversations often took quick, unexpected turns for the worse. When two young women on a lunch break from their office jobs wondered why so many people vote “false,” I told them about a young man from the Bronx who said he had applied for 10 jobs without receiving a single response. I could see them trying to make sense of this, before they got angry and began to blame the man for applying for jobs that were out of his reach. “Why doesn’t he just apply for fast-food jobs until he can find better work?” they wondered. It was depressing to hear these white-collar workers attack a person they hadn’t met and make assumptions about his mistakes rather than question a system that can be so difficult for those actively seeking work.

I continually reminded myself that those who forcefully defend capitalism do so because they feel threatened. As much as we mythologize bootstrappers, economic mobility remains low in the United States, compared to most countries in Europe, while income inequality is soaring. These are facts, but the people I talk to are not arguing facts. They are hanging on to their hopes, holding on to stories they have been told about the American dream. Capitalism creates wealth and distributes it to those who deserve it. Work hard, work smart and you’ll be OK.

Challenge these ideas, and you unsettle a critical notion that keeps us going: we want to believe we’re totally in control of our lives. In my experience, all but the most arrogant will admit that they got where they are in part out of luck — but if one speaks of the privilege of coming from a particular class, race or social environment, it challenges many people’s sense that they have free will. The idea that folks may not get what they deserve — that our culture is not a meritocracy — can be very threatening.

Rather than face systemic injustice, it’s far more comfortable to find a rationale (any rationale will do) and a target for blame. The unemployed person hasn’t tried hard enough, or her standards are too high. The rich person has a skill for business we just can’t comprehend. Saying otherwise is more than a challenge to the economic system; it threatens our sense of agency, our belief that we can improve our own lives and our confidence in who we are and who we can be. It’s much more reassuring to believe that capitalism works and that if someone fails it’s that person’s fault.

My favorite response to the sign was from a 17-year-old high school student in Boston. She said: “Capitalism can’t work for everyone. If it did, it wouldn’t be capitalism.”

Fears of failure, of losing control and landing on the wrong side of capitalism fuel an absurd idea of what it means to work hard. When I spoke with one woman about “hard work,” she laughed when I defined that as a 35- or 40-hour week. (I admit, by starting at 35 hours, I was baiting her.) Her idea of hard work was her own 70-hour week. If she divided her labor hours in two, she and another worker could each make a decent full-time salary and have enough time off to live fulfilling lives. Instead of work being a means to an end, for many, work has become life itself. Our culture sees the ramifications as normal: overemployment for some, unemployment for others and stress for everyone.

I’d rather we work less, spread the work around, enjoy time off and live complete lives. With more free time, we could build a more robust democracy by engaging with the political issues that affect our lives and organizing more participatory structures to make decisions in our communities. If there’s anything threatening to capitalism, it’s that! It’s convenient for capitalists to have everyone else thinking they don’t work hard enough and that any ill fortune is their own fault.

This is the trap of asking the question “How is capitalism working for you?” While the personal focus helps people avoid abstractions and regurgitated talking points, it also steers them away from the systemic problems of capitalism in the same way that they are encouraged to avoid thinking structurally about the economy every day. Luckily, Capitalism Works for Me! provides a visual cue for a return to that bigger picture. Those who press the “false” button see that they are not alone but are among hundreds who feel that capitalism does not work for them. Those who vote “true” also see that they are not alone but that just as many people are disputing the effectiveness of a system that is rarely called into question. The discussion doesn’t end once the person makes a choice. How well can capitalism be working when so many say it doesn’t? Can the “false” voters, who held the majority in Times Square, all be lazy and stupid?

My favorite response to the sign was from a 17-year-old high school student in Boston. She said: “Capitalism can’t work for everyone. If it did, it wouldn’t be capitalism.” This is where the conversation needs to go: why do we settle for a system that fails so many?