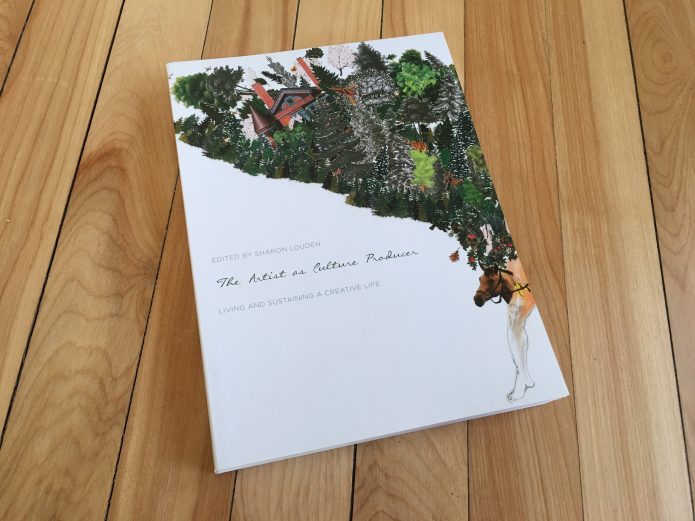 I contributed a chapter to The Artist as Cultural Producer: Living and Sustaining a Creative Life (amazon, library). The book includes forty essays from “artists who have successfully expanded their practice beyond the studio and become change agents in their communities.”

It’s edited by Sharon Louden, published by the University of Chicago Press, and you can get a copy at your local bookstore, library, or amazon.

When I was young I was often told the future was wide-open and full of possibility. But the means to that end was a strict and prescriptive path. Follow instructions, work hard in school, continue on to the best college possible, and from there you’re free to pursue your dreams! And be warned: not following this path will lead to limited options and likely failure. You can do whatever you want with your life, but you have to do this first. The problem was I couldn’t stand school.

I was a good student. I was curious and wanted to do well, my grades were good, I was liked by teachers and fellow students, but over time I wanted more than what my public high school could offer; for example the few art classes offered were a joke, music was about rote performance rather than creation and composition, subjects like photography and film didn’t exist. So out of obligation I set my desires aside and continued to push myself in areas that felt less and less relevant as I advanced; upper-level math, college level history courses, marching band, track and field, and so on. I was disciplined, endured as much as I could, and tried to channel my frustration into improving the situation the ways I saw how. I sought out information on my own with the spare time I had, and even tried to improve the school by running for, and becoming, class president — this didn’t work. Over time my effort wore down to indifference, then to resentment. Yet every weekday I had to come back, continue to work hard, and came to hate it.

All the details leading up to being committed to a psychiatric hospital are not relevant here, but this antipathy with school was layered onto other issues including a family health crisis and a death, severe migraine headaches, stress, and a lack of skills in coping or even speaking about my problems. It all collided. I was overwhelmed, in physical pain, severely depressed, and felt exhausted in every way — I’d run out of ideas and could feel myself self-destructing. I withdrew and internalized — I didn’t tell anyone because I didn’t know how. There’s a lot I’m leaving out, but it was bad. I needed it all to stop and felt if I could die somehow, at least I could have relief.

Someone happened to ask me the right questions at a specific moment and caught a glimpse of what was happening inside. I was checked into a hospital later that day on an involuntary hold — though at that point I was ready to volunteer. That intervention saved my life.

Those months spent in treatment became a turning point. Over the next few years I learned skills to manage stress in my life, but more importantly, I felt like I narrowly cheated death. Doing what I was told had been a total failure so I could now, rightfully, say fuck it all. I had license to reshape my life as I pleased.

When I checked out of the hospital I took a state test to leave high-school. I had no idea where I was headed, but whatever I did would be better than before.

The contrast was unreal. The outcome of my hospitalization was independence. I felt freed from constraints that had completely failed for me and released into an open space where I could choose how to move forward. There were options and I could make choices. It was the best possible outcome from a horribly painful situation and I am still so grateful for it.

The echo of these experiences are in nearly every art work I make. My work is about sharing liberation and agency. We don’t have to accept our world as it is, the ways we’re told we should navigate it, nor the costs and misery that come along with it that benefit so few. I don’t want to make art that just points out problems. I want to go further than suggesting solutions. What I’m trying to do is offer the experience I had — to give people the feeling of liberation and power that I felt. The democratic ideal that we’re not subject to culture: we can create it.  And I trust they will go on and do so.

I have a piece in the upcoming Beautiful Trouble book

Beautiful Trouble is a collection of tactics and strategies for Creative Activism. Seven grassroots groups are contributing their best ideas, including Agit-Pop/The Other 98%, The →