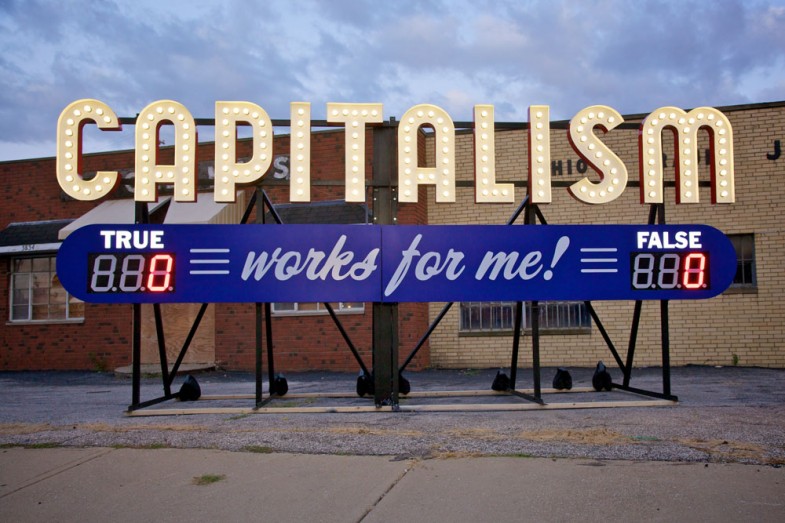 Produced by ArtsHouse Melbourne and the Melbourne Fringe Festival 2018

An 8 minute presentation on the project

from the Creative Time Summit

Response interviews from around the Boston Area

These two video excerpts are taken from a video shown at the deCordova Biennial.

(from the SPACES catalog)

Starting a conversation about Capitalism is like walking up to a stranger and asking, “Can I talk to you about Jesus?”

The word “capitalism” is a red flag. And for good reason–pretty soon either some dude is talking your ear off about “The System” or aggressively confronting you about taxes. Ugh.

At the same time, capitalism is discussed every day using euphemisms like “jobs,” “job creation,” “the business climate,” and discussing whatever “crisis” is deemed relevant; a housing crisis, financial crisis, social security crisis, tax crisis, or fill- in-the blank crisis. But the whole is rarely a topic of frank discussion–much less alternatives or meaningful reform.

As a culture, we need the vision and boldness it takes to discuss the problem itself. The idea that “there is no alternative” to the way our world works takes away our ability to dream. As citizens we need the courage to begin these discussions on order to move on to new and better visions for the future.

But what to do? Start a conversation about capitalism and friends edge away slowly, and strangers even faster.

Throughout my artistic career I’ve challenged myself to take on difficult subject matter in ways that are engaging and fun. I’ve found humor and popular culture can open doors to difficult but worthwhile subjects and enable us to envision and move toward new, utopian futures.

The sign starts here in Cleveland and will tour the US leading up to and beyond the 2012 presidential election. People who vote will be given the opportunity to have their portrait taken and give a short statement about why they voted the way they did. There will be a book, website, and videos that document people’s interactions and thoughts.

I’m excited that this piece takes on what for most Americans is a taboo, or even nonexistent subject: whether global, hegemonic capitalism actually works for most people. But whew, talking about that is boring! And telling people what to think is worse! This sign gets passers by to participate in deceptively simple vote (True/ False) which only pretends to offer resolution. Every aspect of the interaction draws them in to more complex questions and conversations, leading to new thoughts and ideas about a better world!

For 50 years it has been unacceptable, politically, in the United States to ask what is basically a straightforward question. We have a particular economic system, it’s called capitalism. We have every right as a society to ask of that system, is it working? Is it working for us? Do the benefits and the costs balance themselves out in a way that says, do we want to keep this system? Or that says, we want to change this system? Or that says, we ought to look at an alternative system. We’ve been afraid to ask that question. We’ve been afraid to have public debates–that’s the legacy of the cold war. We can’t afford anymore to not do that. We have to raise the question.

Commissioned during a SWAP residency at SPACES in Cleveland, OH
Fabrication by Signature Sign in Cleveland, OH (216) 426-1234
Electronics by Alexander Reben
Completed with support from SPACES and 434 backers on Kickstarter
Moving in Cleveland courtesy of the amazing Wood-Lee International Art Handlers

Other posts on the project

“…if people have a position on something and you try to argue them into changing it, you’re going to strengthen that position. If you want to change people’s ideas, you shouldn’t try to convince them intellectually. What you need to do is get them in a situation where they’ll have to act on those ideas, not argue about them.”
–Myles Horton, civil rights organizer

“What disappeared […] was the belief that humanity, as a collective subject, can actively intervene and somehow steer social development. In the last thirty years, we are again accepting the notion of history as fate. Thirty or forty years ago, there were still debates about what the future will be–Communism, socialism, fascism, liberal capitalism, totalitarian bureaucratic capitalism. The idea was that life would somehow go on on earth, but that there are different possibilities. Now we talk all the time about the end of the world, but it is much easier for us to imagine the end of the world than a small change in the political system. Life on earth maybe will end, but somehow capitalism will go on.”
–Slavoj Zizek

“We can learn [from the past] as human beings always have and we can forge a country out of an opening of the debate about this economic system. And I want to be part of that, and I think the American people are ready and interested in doing it as well.”
–Richard Wolff, Economist

Yes, there is a book. And a lot more. Information on the “Capitalism Works For Me! True/False” book to come…

See this page for information on presenting the sign at your venue.