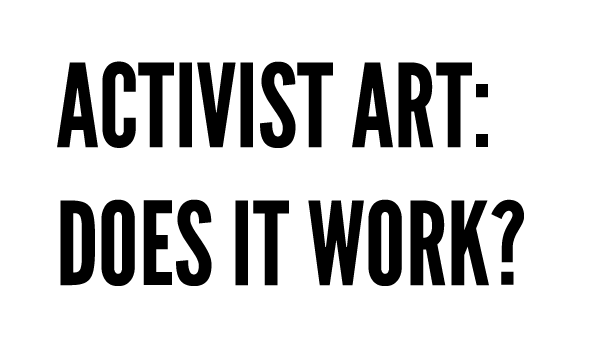 Activist Art:  Does it Work?

The first rule of guerilla warfare is to know the terrain and use it to your advantage. The topography on which the activist fights may no longer be the mountains of the Sierra Maestra or the jungles of Vietnam, but the lesson still applies. Today, the political landscape is one of signs and symbols, story and spectacle. Responding to this new terrain, there has been an upsurge in the use of creative, artistic, and cultural strategies as a tool for social change. This practice goes by many names: political art, activist art, interventionist art, socially engaged art, and social practice art. No matter the description, artists are using their aesthetic training and skill to wage battles for social change. Yet as practitioners and trainers in these forms of artistic activism, we are haunted by the question: Does it work?

So we started asking artists whose work we respect this very question:

SD&SL: As a political artist, how do you know when what you’ve done works?

The above is just one example, and Haacke’s response is meant to be humorous, but in asking scores of talented and sophisticated activist artists this seemingly simple question, and in surveying hundreds of examples of activist art, we were struck by the inadequacy of the conceptualisation of the relationship between arts and demonstrable social change. Unfortunately, much of what passes for activist art seems to be aimed at four hazy targets:

The Whole World is Watching. The artist determines the success of a particular practice by the amount of media coverage it generates. If the work is covered by the mainstream news media, or the art press, or is noticed by the activist and arts communities at all, then the artist can count this as a success. This is not merely self-aggrandisement: the function of the media coverage is often thought of as a means to “raising awareness” and bringing the political or social issue to the attention of a wider audience.

Power of the Public Sphere. In this case, the success of the work is determined by whether it fosters conversation on a particular issue. Here the ideal is not to offer up a message, or even a particular perspective, but to stir the pot and “start a dialogue” around a topic so that audience members can — either individually or collectively — come to their own conclusions.

The Truth Will Set You Free. The aim here is to expose an uncomfortable or inconvenient truth. Art becomes the means for revealing facts about reality — often concerning corporate malfeasance, government corruption, or social injustice — that the artist believes are hidden, censored or otherwise unknown by the public at large. The mere exposure to the truth, it is believed, results in transformation.

Political Expressionism. Art becomes the means by which the artist’s rage, joy, disgust, or hope is communicated to the world. In this case, it is the act of bold self-expression itself that is the goal. Artists see themselves as bravely conveying their feelings about the political moment and judge whether or not their art succeeds in relation to how well that feeling is expressed.

What these artistic activist aims have in common is a faith that awareness can change the world without any specific follow-through. This is magical thinking. Ironically, this sort of magical thinking is deeply rooted in the rationalist Enlightenment tradition, which holds that knowing, expressing and conversing upon the Truth leads to social transformation. Knowledge = Power. There may have been a certain validity to this point of view once upon a time. When Church and State had a monopoly on Truth to entertain opposing points of view was an implicit strike against the powers-that-be, but in the age of the Internet — of information surplus rather than scarcity — this faith in the power of mere awareness strikes us as dangerously naÃ¯ve.

These aims also share a fear. For an artist, declaring they will solve a social problem makes one vulnerable; it’s difficult, art school doesn’t teach it, and it is obvious to others when you fail. But awareness is safe and comes easily for anyone trained in the arts. In art school, we are taught to use shortcuts like, “make it big, red, and shiny”. Applying this lesson to activist art, we take some controversial imagery, mix it with a hot-button issue, and make it very public. Awareness can also just be a euphemism for attention, and everyone — especially perpetually under-appreciated artists — loves a little attention. But as people who believe that art and artists not only can bring about social change and, given the cultural terrain of today, are necessary to bringing about social change, we are deeply dissatisfied with these ambitions. We support all those artists who are working to bring positive and progressive change to the world; we just insist that they aim higher and shoot further. What is at stake is the efficacy of this practice.

Awareness is important, but it is also not enough. Awareness, and its attendant components: expression, revelation, distribution and dialogue are, to borrow a phrase from the social sciences, “necessary but not sufficient conditions”. Action without awareness results in an unthinking activism with stupid, and sometimes horrific, consequences. But awareness without action is just as bad. It results in the appearance of political engagement without any of its results. It can make an action into a release valve instead of a turning point. It is an activism of bad faith.

If, as artistic activists, we are to take ourselves and our work seriously, we need to trace out the explicit connections between our practice and the change we want to see in the world. This might mean measuring the effects of our work in changing public opinion, working within larger campaigns with clear material goals, or creating art practices that constitute new communities committed to collective action. We wish we had an easy answer but we don’t. In fact, we resist the easy answers because we don’t think a simple response would do justice to the power of art (an aspect of which must always be beyond explanation) and the myriad ways in which social change happens. Nevertheless, understanding the complexities of the process does not absolve us of the responsibility of envisioning and articulating clear outcomes, goals, even dreams for what we want to have happen and the means by which this will occur. We look forward to the day when we can ask the question: Does it work? And receive the answer: Yes, and here’s how…