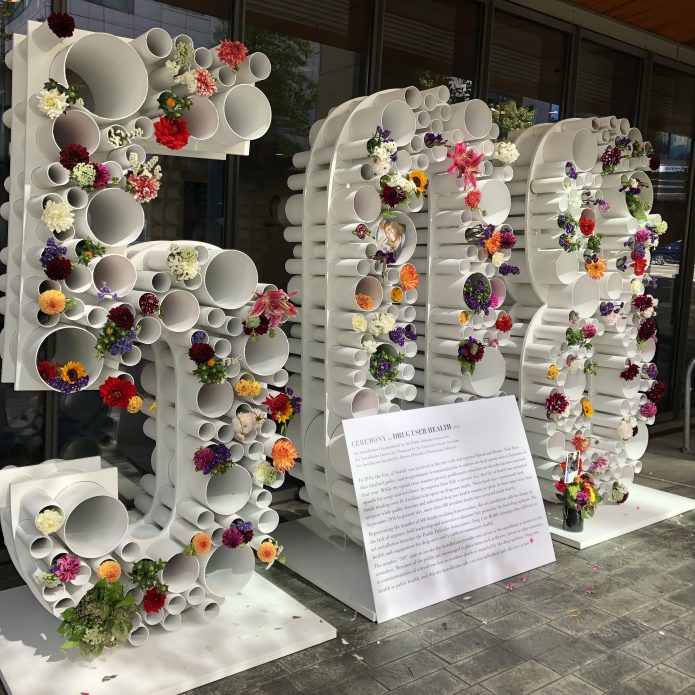 508 is the number of people who have died from overdose in the city since the county’s Opioid and Heroine Task Force, unanimously, made a series of recommendations to stem the crisis in the county. These included opening a supervised consumption site (which we’d been working on with the Yes to SCS campaign). Since then the city has $1.4 million dollars unspent for over a year and earmarked for drug user health – specifically opening an SCS.

I designed these with numbers with The Center for Artistic Activism and Seattle’s Public Defender Association. The tubes are for people to leave behind memorials, notes, flowers. If you live in Seattle, please add to it. We tried to plan it well, but the day the numbers went up they were already behind the actual death count. We’re hoping as the politicians who have made promises walk by this, they may have a renewed sense of urgency.

508 in front of Seattle City Hall – Photo by Shannon Wallack

The director of Real Change News Real wrote a short piece about the work. Director’s Corner: A successful approach to addiction demands political courage and compassion.

The Seattle Post-Intelligencer also has a story by Becca Savransky.

The Public Defender Association had to fight City Hall on several fronts to have this placed. You can follow some of this on facebook.com/yestodruguserhealth/ Here’s some excerpts:

The “508” art installation was intended to be installed inside the City Hall lobby, in the same location where city officials and many others regularly conduct political speech. The City refused permission for this, saying (counter-factually) that only City officials can hold speech events inside. While objecting on several grounds, we tried to compromise in a space where the City acknowledges others’ speech can be permitted—in the wide covered area near the 5th Avenue entrance. No success.

So late yesterday afternoon we were told “508” would have to move along. Ironically like drug users facing continuous displacement, the art installation was packed up and shuffled down to the Plaza below City Hall, on the Cherry Street side. The numbers now face inclement weather with poor protection. They await today’s rain wrapped in plastic sheets. Perhaps their new vulnerability and exposure more appropriately stand for the situation of many drug users in our community. In any event, this is our new home until September 19, which overlaps with International Overdose Awareness Day on August 31.

And a few days later (emphasis mine):

Refusing permission inside the City Hall Lobby and in the original location at the City Hall 5th Avenue entrance, the City is forcing us to re-apply for a permit every three days until September 1st for its current location on the City Hall Plaza beside Cherry Street.

The City is requiring all-day attendance to “508” to satisfy our permit. So, please attend, interact, and record your attendance. Our staff is providing this the best we can for the time being, and have organized impacted communities who are members of Yes to Drug User Health to assist during the day and at night. To record your attendance, you can fill out the form below, or send an email or picture to jesse.rawlins@defender.org time stamping your attendance. In this way, we will “attend” the memorial with people power, organizing to collectively commemorate all people impacted by overdose and the drug epidemic.

The work has definitely touched a nerve with the City.

We designed this to happen on a timeline, hit a certain budget, be temporary and indoors. Each letter is 8ft by 4ft so they could be laser cut from a single MDF panel. The tubes are a variety of pre-made cardboard shipping tubes along with 8, 10, and 12 inch concrete form tubes you can buy at a local hardware store. We were hoping that cutting so many holes into MDF and using cardboard would keep it light, but the numbers are not light.

We originally designed the numbers for indoors – they were supposed to be located in the lobby of City Hall. If we were to do it again:

Fabrication by Boomslang in Seattle.