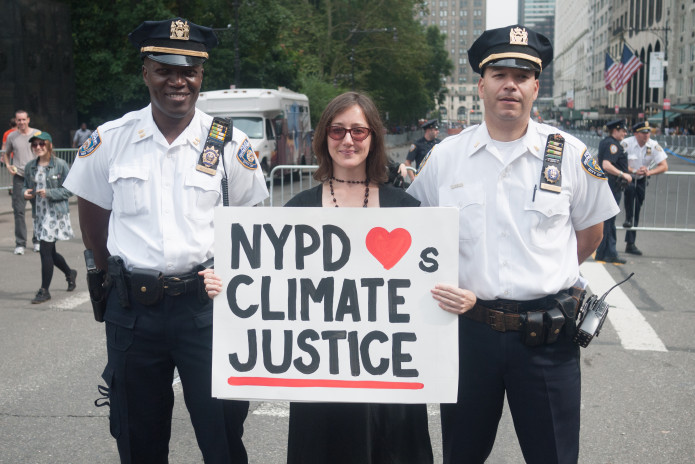 We approached NYPD officers along the People’s Climate March, showed them our sign, and asked if we could take a photo with them. Most were good sports about it. In fact, some of the most intimidating looking turned out to be the most pleasant.

Victoria Estok approached the officers about the photos, Steve Lambert shot them.

Note: Officers mentioned to us they are not allowed to make political statements – we respect that. These photos are not meant to show any endorsement by individual officers, and only demonstrate good will towards the participants.

These photos are licensed under a Creative Commons BY-NC-SA license.

Nestled in the basement of an abandoned high school in Beacon (New York) Design for Change found itself in artist Steve Lambert‘s studio chatting about art, his parents (a former Franciscan monk, and mother, an ex-Dominican nun), drumming circles and his recent project with ‘The Public Energy Art Kit’ (P.E.A.K), a collaboration with the Post Carbon Institute.

Originally posted on the Oxfam Australia Design for Change site 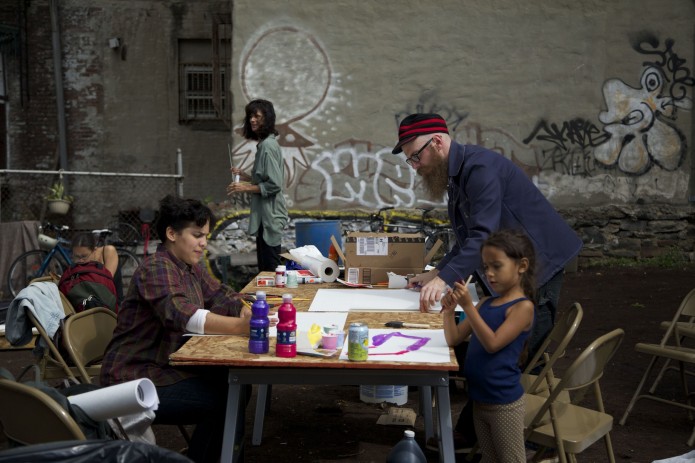 Join artists, scientists and activists at La Casita Verde for an afternoon of making the day before the People’s Climate March. We will collaborate on eye-catching signs to carry in the march based on your concerns, interests, hopes and dreams. Fun for all ages. Sign-making materials will be provided but donations encouraged.

Imagine a mix of Family Feud, Let’s Make a Deal, the front page of the newspaper, and the best college seminar class you ever took. The game show creates a space for topics that many times are not spoken about publicly, with the goal of helping people learn, grow, and act differently in the world as a result.

Topics are suggested by locals wherever the piece is shown.

The United Nations has published their report on advertising and it’s effect on cultural rights. (Download PDF). Last October I was invited to a meeting at the United Nations to contribute to the development of this document. The Special Rapporteur will present it in late October of this year. 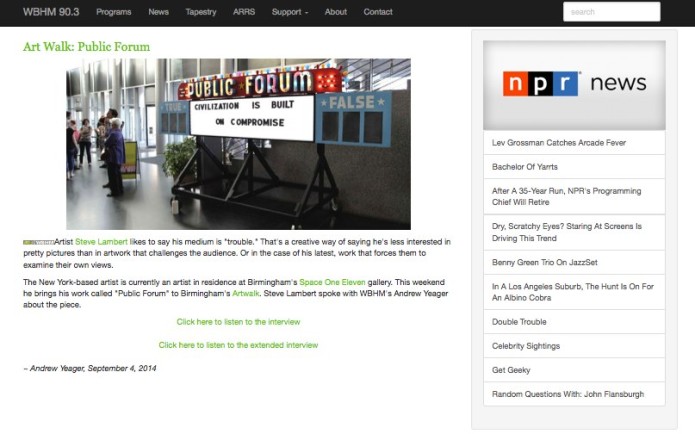 Artist Steve Lambert likes to say his medium is “trouble.” That’s a creative way of saying he’s less interested in pretty pictures than in artwork that challenges the audience. Or in the case of his latest, work that forces them to examine their own views.

The New York-based artist is currently an artist in residence at Birmingham’s Space One Eleven gallery. This weekend he brings his work called “Public Forum” to Birmingham’s Artwalk. Steve Lambert spoke with WBHM’s Andrew Yeager about the piece. 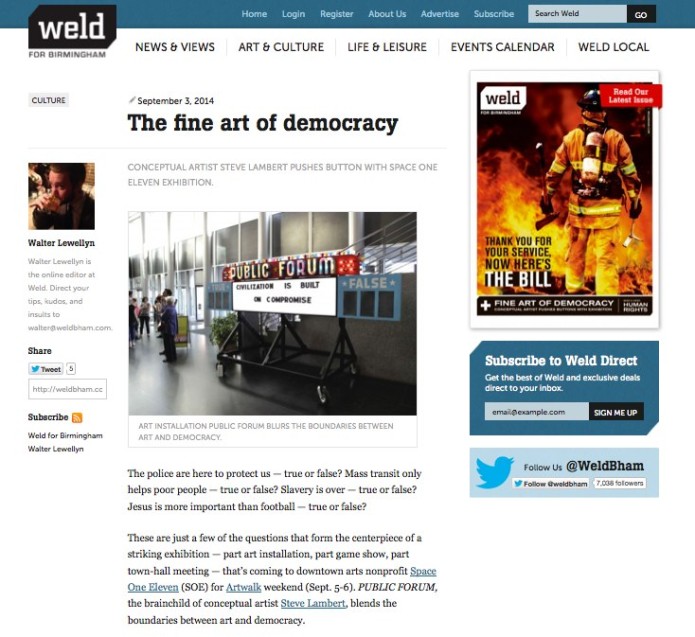 “The Fine Art of Democracy” in WELD, Birmingham’s alt-weekly These are just a few of the questions that form the centerpiece of a striking exhibition – part art installation, part game show, part town-hall meeting – that’s coming to downtown arts nonprofit Space One Eleven (SOE) for Artwalk weekend (Sept. 5-6). PUBLIC FORUM, the brainchild of conceptual artist Steve Lambert, blends the boundaries between art and democracy.

Capitalism is behind at Art Prize in Grand Rapids, MI

CAPITALISM, not working for Grand Rapids as well as you might think. @SteveLambert's @ArtPrize at @KCADofFSU pic.twitter.com/eUpH08NaEV 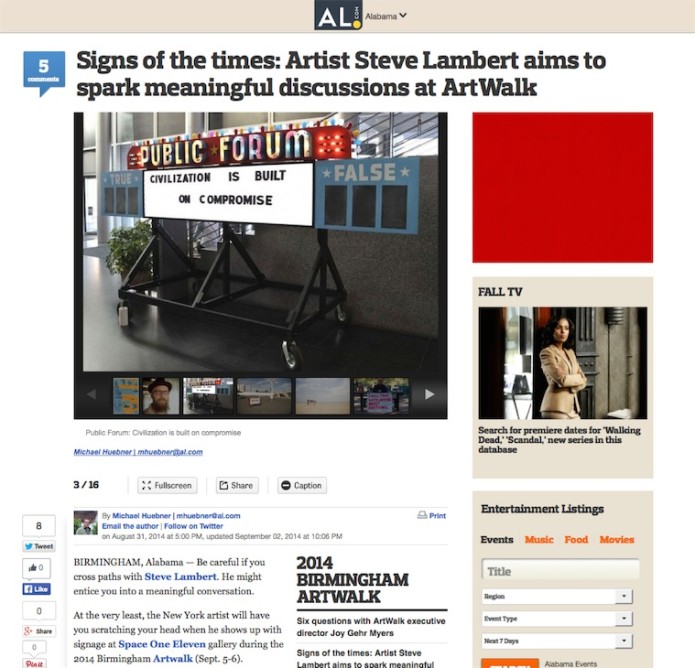 by Michael Huebner on Al.com

Be careful if you cross paths with Steve Lambert. He might entice you into a meaningful conversation.

At the very least, the New York artist will have you scratching your head when he shows up with signage at Space One Eleven gallery during the 2014 Birmingham Artwalk (Sept. 5-6).

The New York Times Special Edition will show at Generator Projects in Scotland.