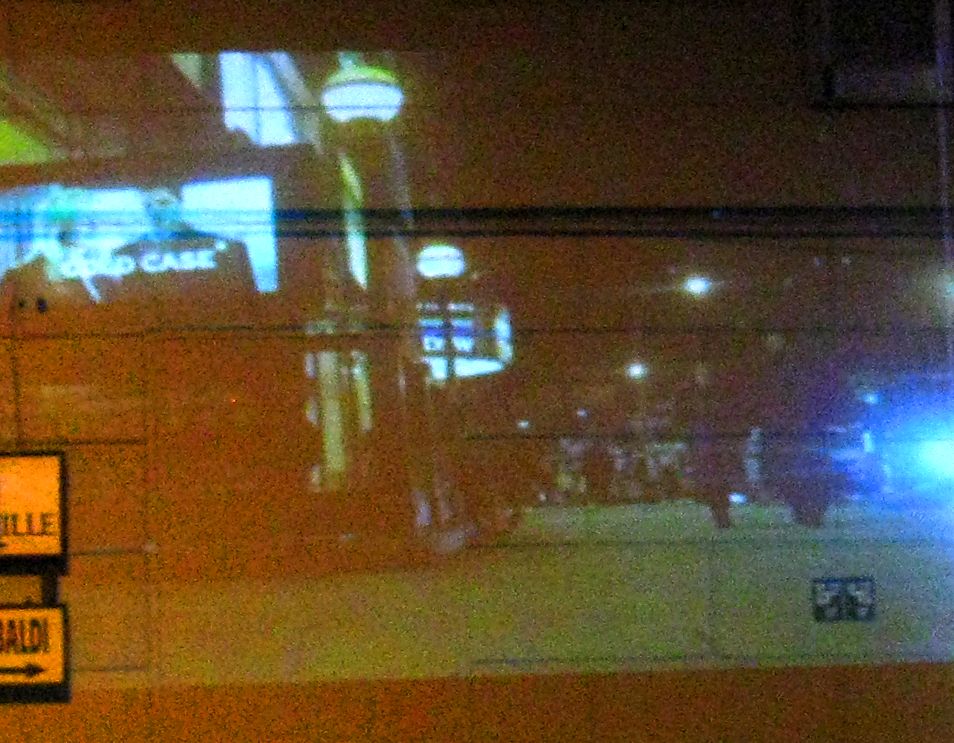 Light Criticism made an appearance in the International Guerilla Video Festival in Milan. The Festival was held on Corso Como, a street with its share of outdoor advertising. The videos were projected alongside billboards and commercial shops on Corso Como. 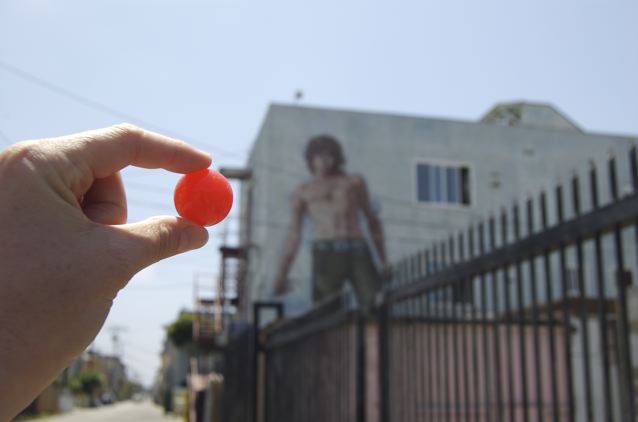 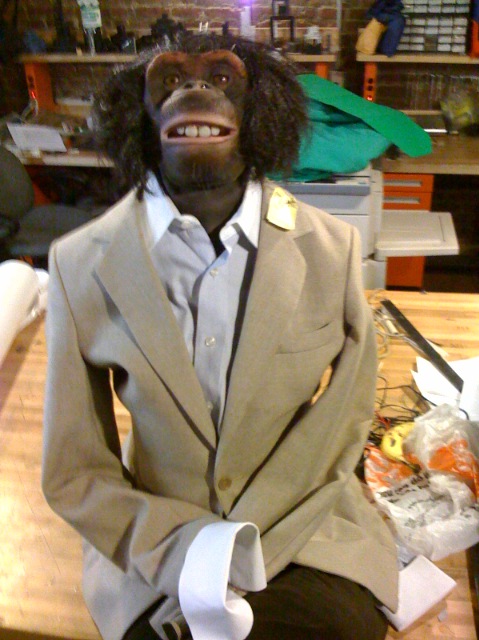 Inside the Artist’s Studio is a radio program hosted by a robotic Chimpanzee named James Chimpton. Chimpton’s brain is powered by a markup language Jeff Crouse created called ABSML, or A BullShit Markup Language. The result is rather absurd – a clothed robotic monkey, interviewing artists in the Biennial about their work, in a pompous robotic english accent.

The operator/puppeteer, usually Jeff or I, would submit the interviewee’s name, website, and medium into the software. Based on that information, a set of interview questions would are generated and the puppeteer would then use the software interface to trigger the questions. You can here sample interviews below. They are often very funny.

The project came about at the request of Neighborhood Public Radio, who asked Jeff Crouse and I to put something together using the text generating software we were developing called ABSML (then called ASSML or DPML) for their show at the 2008 Whitney Biennial. ABSML is still being developed for a Turbulence Commission, a collaboration with Red76, and other fun projects coming soon.

Sincere thanks to Alex Reben for helping to hack the Wowee Chimpanzee head.

Bare CFL bulbs give off harsh light. Soften it with the Bright Idea Shade.

The Bright Idea Shade is a project of the Eyebeam OpenLab, by Sustainability Action Group members Michael Mandiberg and Steve Lambert, with Simon Jolly, Peter Duyan, and Oscar Torres. We are converting all of our silver tipped incandescent bulbs into CFL bulbs (as they burn out.) The problem is a bare CFL bulb gives off harsh light that sometimes prevents people from making the change. So we set about designing a lampshade for the bulbs. We started with the Universal Polygon Lampshade and made it fit a CFL bulb, built it out of heat resistant photo diffuser material (found a diffuser material that could be laser cut, and built a laser cutter template.)

Steal this idea:
The Bright Idea Shade is licensed with a Creative Commons Attribution license. Our goal is to get these kits into the hands of decision makers at retailers and manufacturers like Target, Walmart, Kmart, Ikea, Home Depot, Bed Bath And Beyond, etc. We have no interest in doing the long term manufacture & distribution of this project. We are not business people. The promise of the CC-BY license is that it can go out in the world and be reproduce by others who have much better distribution channels and manufacturing expertise.

James Chimpton, the interviewing chimpanzee robot Jeff Crouse and I built, broke down one day. The day we had the highest profile interview guests — Rich Dahm formerly of the Onion and currently of the Colbert Report and Todd Hanson of the Onion. So, I had to improvise.

Listen to us chit-chat on a May afternoon at the Whitney Museum. 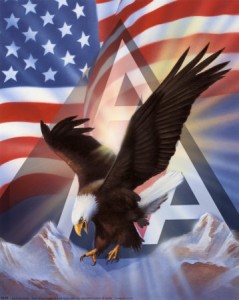 Over at the Anti-Advertising Agency, we founded a grant we call the Foundation for Freedom Award. It’s designed to oust talented, creative, and frustrated advertising, marketing, and PR creatives from their current careers and into something more worthwhile.

“The 2008 Anti-Advertising Agency Foundation For Freedom Award (AAAFFFA) aims to respond to the increasing commercialization of public space, human relationships, journalism and art by decreasing the number of individuals working in industries that directly support these goals.” The winner of the 2008 AAAFFFA will:

Occasionally I show up on Michael Leahy’s Cool As Folk show. When I was doing my radio show at KDVS, Mike’s show was just after and I would usually hang around and talk on air. When I moved to NY, I would call and check in every few weeks. Last week I was on talking about a sort of a driving game I created along with Ian Connelly, Alicia Rice, Matthew Moore and some other people while traveling or hanging around. You can listen to it here:

This morning Chicago Public Radio’s show Eight Forty Eight did a piece on the Anti-Advertising Agency’s Foundation for Freedom. It includes interviews with me and Anne Elizabeth Moore. See the transcript here or listen to the audio below.

This morning Chicago Public Radio’s show Eight Forty Eight did a piece on the Anti-Advertising Agency’s Foundation for Freedom.

The promise of cable TV all those years ago was that by paying for the service, you could avoid the commercials. That promise has faded, with most cable and satellite channels carrying just as many ads as regular TV. Besides television, those advertisements find their way onto billboards and magazines, trailed behind airplanes and stamped on pieces of fruit. Much of the work that goes into these ads is done by creative types. And it can be a lucrative career move for work-starved artists, writers and musicians. But one organization wants those folks to quit their jobs and use their talents elsewhere. Eight Forty-Eight’s Michael De Bonis has the story.

See the transcript here or download a mp3: AAAFFF on WBEZ 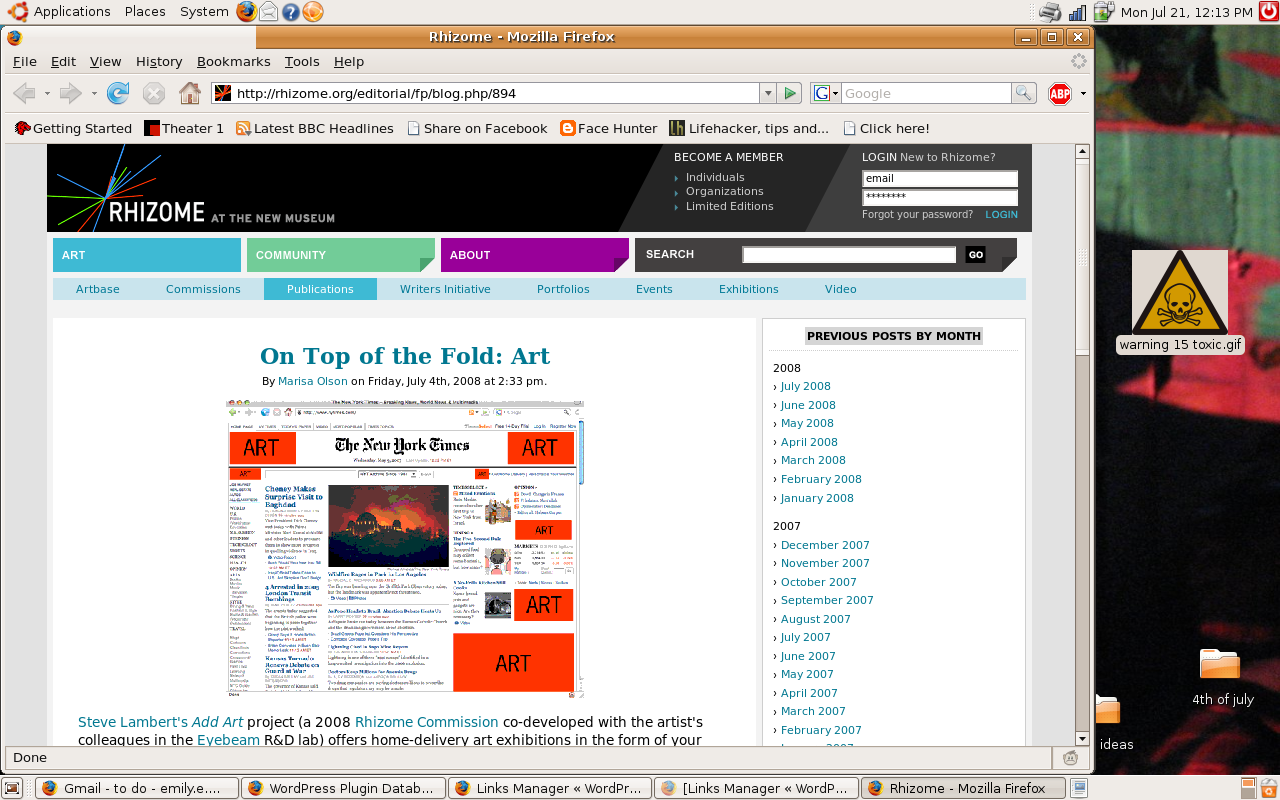 Marisa Olson wrote about Add-Art on the Rhizome website. In her article, Olson talks about Add-Art’s relationship to the Anti-Advertising Agency, and goes into detail regarding the Add-Art shows thus far: Charles Brokoski’s monochromatic boxes, Sarah Cook’s curation of Monica Studer and Christoph van den Berg, Bennett Williamson, and our opening show curated by Joan Cummins of the Brooklyn Museum.